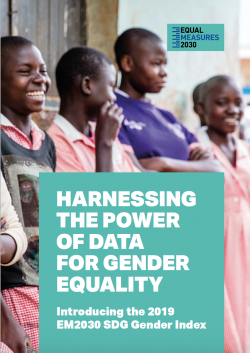 The inaugural SDG Gender Index, developed by the Equal Measures 2030partnership, found that 2.8 billion women and girls currently live in countries that are not doing enough to improve women’s lives.

The index, launched at the Women Deliver conference in Vancouver, will be updated in 2021 and at regular intervals until the 2030 SDG deadline. Data is drawn from UN agencies, the World Bank, NGOs, thinktanks and from the consultancy firm Gallup.

Europe and North American countries topped the index, while the bottom was dominated by African states. With just 11 years to go until 2030, nearly 40% of the world’s girls and women – 1.4 billion – live in countries failing on gender equality.

Of particular concern for those involved in compiling the index was that more than half of countries scored poorly on efforts to achieve SDG 5, the much lobbied-for standalone goal to end gender inequality and empower women. The goal contains specific targets to eliminate all forms of violence against women and girls, end female genital mutilation and child marriage, ensure universal access to sexual and reproductive healthcare, and uphold women’s reproductive rights.

Equal Measures 2030 is a partnership of civil society and the private sector, including the Bill and Melinda Gates Foundation, the International Women’s Health Coalition, KPMG, Femnet, Plan International and Women Deliver. It was set up in 2016 to provide women’s rights advocates with the data they need to hold governments to account for their SDG commitments.