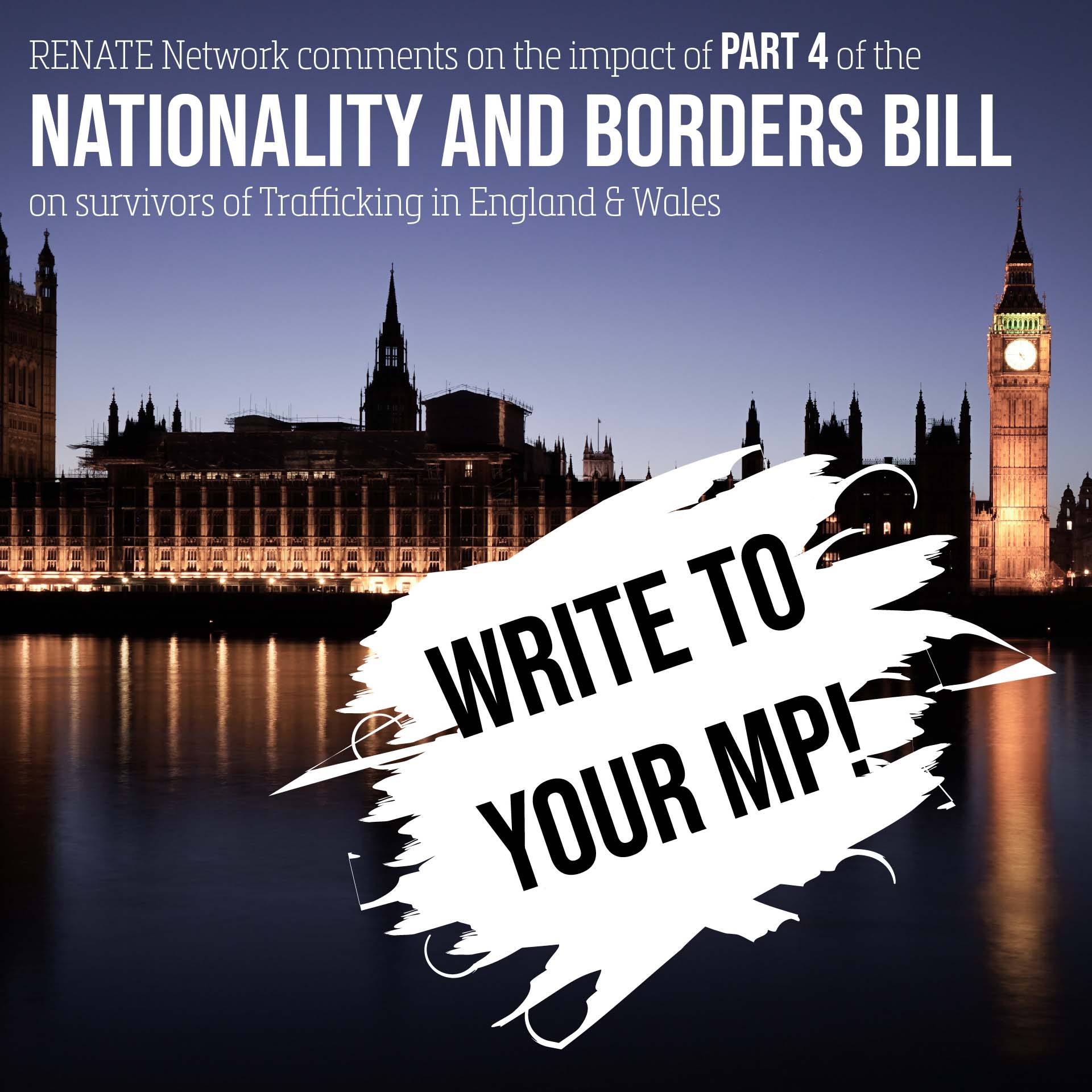 This bill is making its way through Parliament in England, key debate is happening this week – write to your MP!

The Nationality and Borders Bill is currently making its way through the House of Commons and is in the committee stage where the bill is debated and amendments proposed. The government are hoping it will be approved ‘at a pace’.
The bill as a whole is generally very bad news for asylum seekers and victims of modern slavery.

Modern slavery legislation in England and Wales is primarily through the Modern Slavery Act (MSA) 2015. It is therefore not appropriate, in Renate’s opinion, that modern slavery forms any part of this new immigration bill that seeks, among other things to penalise Victims of Trafficking (VoT) due to their immigration status (clauses 46,47,51,54,55) creating a two tier system where Victims of Trafficking with immigration issues will have a more onerous time proving they are VoT.

Victims of trafficking are first and foremost victims of crime, at least 34% referred to the National Referral Mechanism (NRM) in England and Wales in 2020 being British nationals where immigration issues do not feature at all, additionally over 60% of all referrals to the UK NRM last year, state their exploitation happened in the UK only, why should the majority of victims be negatively impacted due to their immigration status when the crime happened in the UK?

There are 9 key clauses in Part 4 of this bill which impact survivors of Trafficking.  The majority (7) have a serious negative impact and 2 provide some hope of positive impact.

Survivors of Trafficking will be negatively impacted by Clause 49 – a reduction in the Period of Reflection and Recovery. It is well documented that victims of trafficking struggle to ‘tell their story’ once rescued and can take many months if not years for the full horror of their exploitation to be known. In 2015 the MSA was enacted giving victims 45 days of reflection and recovery. This was never long enough and Lord McColl launched the Victims Support Bill from the House of Lords in January 2019, with a key element extending this period of recovery to one year. Many prominent conservatives like Iain Duncan Smith were key supporters of this Bill, but it has stalled and not made any notable passage since the start of COVID. In practice though this 1 year period has been adopted.

A 2021 report published by the Modern Slavery Policy & Evidence Centre showed strong evidence that good and early access to legal advice for VoT reduces the likelihood of re-trafficking.
Accessing good legal advice for VoT is a lottery in England and Wales.
Legal aid is available to VoT but to access it is often very difficult and it is only available through organisations with an immigration legal aid contract (currently only 248 in England & Wales which is heavily London centric).
One of the few positive clauses in the Bill is regarding the provision of legal aid for VoT (clause 54 and 55) where up to 7 hours add on provision of legal advice is available to help possible VoT decide whether or not to enter the NRM, however this is contingent on the claimant already in receipt of (immigration) leave to remain/enter advice. Over half of NRM referrals have no obvious immigration claim so would not have access to this pre-NRM advice
The impact of this positive clause is therefore likely to be very small despite access to legal aid being one of the bigger more important issues for VoT, this is an opportunity lost to address this issue.

There are many other areas of Part 4 that will seriously affect survivors and RENATE are watching with interest what amendments might be tabled in the hope that significant change can be made to this and other parts of the Bill before it is enacted.