Reminding us of our obligations to children trafficked and exploited in the cobalt mining industry. 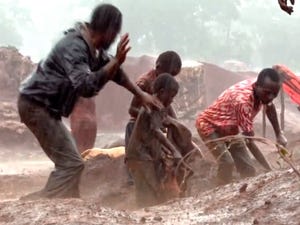 It is not possible to remain unaware and unresponsive to the harsh realities of child trafficking for labour and exploitation purposes in the cobalt mining industry, thanks to Lord Alton’s 11 March 2020 query of senior representatives of the CDC- the UK’s development finance institution- about reports that Auguste Mutombo, the Executive Director of Alternatives Plus, an NGO based in the Democratic Republic of Congo, being forced to flee the country after death threats.  (Alternative Plus works to improve conditions in the artisanal mining sector).

Following the injury and deaths of children working in the cobalt mines, Alternatives Plus launched a landmark legal action against Apple, Google, Dell, Microsoft and Tesla.

Lord Alton said there had been reports that 36,000 children are working in the DRC’s cobalt mines- used to power lithium batteries- and said that if UK funds were reaching companies in the supply chain that are in breach of the UK’s laws on modern day slavery and that the CDC should take action against them.