OSCE report on the Alliance against Trafficking in Human Beings’ 20th Conference 20 – 22 July 2020. 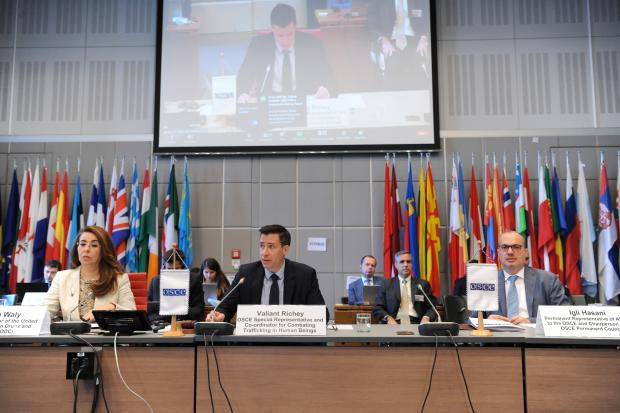 Prosecute human traffickers and deliver justice to victims: 20th OSCE Alliance Conference against Trafficking in Persons (20 -22 July 2020) calls for an end to impunity.

Identifying effective ways to improve the prosecution of human traffickers was the focus of the 20th high-level OSCE Alliance Conference against Trafficking in Persons, which opened 20 July 2020 in Vienna.

The conference’s theme acknowledged that while many countries have legislation and action plans to combat human trafficking, impunity remains widespread across the world and in the OSCE region. It is estimated that there are about 25 million victims of human trafficking globally. According to the latest reports, in 2019 only a little more than 11,000 traffickers were prosecuted – roughly one prosecution for every 2,154 victims.

Against this backdrop of declining rates of prosecution in recent years, officials opening the conference called for action and investment in the area of prosecution.

“It is a drop in the ocean”, said OSCE Special Representative and Co-ordinator for Combatting Trafficking in Human Beings Valiant Richey, commenting on the number of prosecutions compared to the estimated number of victims. “The current rate of prosecution means most traffickers never spend a day in a courthouse, let alone a prison cell. This needs to change. Countering impunity and establishing a strong rule of law must be a fundamental cornerstone in the fight against trafficking in human beings.”

The meeting opened with a video message from Ms. Coco Berthmann, a survivor of human trafficking, and Founder and President of the Coco Berthmann Scholarship Fund, who said that “perpetrators need to understand that their actions and crimes will be punished to the full extent of the law.” She urged Conference participants to take action.

Sandër Lleshaj, Minister of Interior of Albania, addressing the conference remotely from Tirana, urged participants to recognize that “confiscation of property, revenue and assets generated by or used for criminal activities remains a crucial strategy. Confiscation directly discourages criminals and can be instrumental to compensate victims and support their rehabilitation”.

Executive Director of the UN Office on Drugs and Crime Ghada Waly reminded participants that “rising poverty and fewer opportunities in the COVID-19 economic downturn threaten to leave many more people at the mercy of human traffickers. Governments need to step up action to prevent exploitation in the COVID-19 crisis, to identify and support trafficking victims, and bring perpetrators to justice.”

Katarzyna Gardapkhadze, First Deputy Director at the OSCE Office of the Democratic Institutions and Human Rights, described human trafficking as a “highly-gendered crime, with low rates of identifications, and even lower of prosecutions and convictions”, and urged participants “to systematically include survivors’ voices into policy discussions and development.”

In a video message, Tanzila Narbaeva, Chairperson of the Senate of the Parliament of Uzbekistan, addressed participants on the role of the judiciary: “The role of the Supreme Courts is key to ensure consistency in jurisprudence and the correct understanding and interpretation of anti-trafficking legislation by first instance and appellate judges. Special attention should be paid to training the judiciary and law enforcement officials.”

Joining from Brussels, Olivier Onidi, Deputy Director General for Migration and Home Affairs at the European Commission and acting EU Anti-trafficking Co-ordinator said: “To counter impunity towards the eradication of this crime and to protect people from becoming victims, we must use all available means to hold perpetrators accountable: from following the money to ensure that the crime does not pay, to making best use of technology and implementing our laws.”

For three days, judges, investigators, prosecutors, law and policy-makers, experts and NGO representatives from across the OSCE region met to discuss challenges and opportunities to enhance the investigation and prosecution of human trafficking and discuss linkages between the prosecution of offenders and the protection of victims before, during and after criminal proceedings. The conference will culminate in recommendations from across the OSCE region on how to make prosecution a more utilized and effective tool in combating human trafficking.

A report on these recommendations will be published in due course.