OSCE recommendations and concluding remarks from the 20th Conference 20 – 22 July 2020. 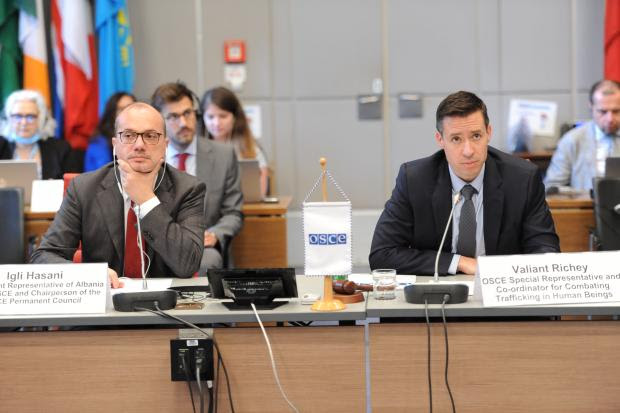 20th OSCE Alliance Conference against Trafficking in Persons conference closes with a call to all 57 participating States to reverse the declining number of human trafficking prosecutions and triple the number of prosecutions for this crime within the next three years.

During the three-day discussion involving State representatives, victims of trafficking, international and non-governmental organizations and academia, persistent challenges as well as a number of good policies and promising practices were highlighted. These included the importance of specialized anti-trafficking units and multi-agency co-operation to build better cases, as well as financial investigations to seize traffickers’ profits and provide compensation to victims. Moreover, the use of a victim-centred and trauma-informed approach by the criminal justice system was underlined as fundamental in ensuring victims’ rights throughout the recovery and reintegration process, and crucial to achieving effective prosecutions.

In his closing remarks, Special Representative Richey stated “Too many victims go without any kind of justice, while traffickers revel in their profits.” Urging OSCE participating States to reverse the declining number of human trafficking prosecutions, he said: “Prosecuting traffickers alone is not the end of human trafficking, but it is a crucial step toward ending it. We need to replace the current culture of impunity with a culture of justice.” He called on OSCE participating States “to set a concrete goal of tripling the number of prosecutions within the next three years.” To achieve that, Richey reiterated that his office was ready to support anti-trafficking authorities in designing and implementing effective strategies to prosecute traffickers and deliver justice to more victims.

Chairperson of the OSCE Permanent Council Ambassador Hasani described impunity as an “an open wound in our society” and hoped that “conversations like the one we have had these three days can help us move in the right direction and work to close that wound.” He then launched a “renewed push to increase the number and improve the quality of prosecutions and to implement the existing commitments we have.” In closing, he endorsed the Special representative’s “strong call to change the current state of affairs, end impunity and reinvigorate our effort to eradicate human trafficking.”

In recalling the main highlights and recommendations emerging from the Conference, Ambassador Hasani and Special Representative Richey underlined that “none of those policies will be effective without political will. We must want to improve. We must carry with us the voices of those who endured human trafficking, honour their courage in coming forward, and take action today.”