Don’t forget to log into RENATE’s events page www.renateevents.net for news of RENATE’s latest video recording, prepared for the occasion of the 8 February, the International Day of Prayer and Awareness against Human Trafficking.

The central theme of the video recording is ‘’An Economy without Human Trafficking,’’ with input on various aspects of RENATE’s anti-human trafficking work.

The video will be launched on YouTube at 18:00 (GMT) 7 February next, by way of an evening vigil on the eve of the feast of St. Bakhita, the patron saint of all who are trafficked.

Looking forward to your joining us then!

Report on the RENATE Trailer event on Sunday evening 18 October

RENATE members, friends and colleagues gathered online, Sunday 18 October 2020, to mark the European Day against Human Trafficking by launching a trailer of the RENATE Film Festival, which is scheduled to take place on 12 September 2021, at the BAFTA Centre, London, UK.

Imelda Poole, IBVM, President RENATE Europe and Julie Etchingham, Journalist, Presenter and Reporter for ITV News at Ten, opened the hour-long event, giving the background to the purpose of the Film Festival and Film Competition, as being a dynamic means to raise Human Trafficking awareness across as wide a demographic as possible.

Ana Stakaj, CEO Mary Ward Loreto Albania, presented an overall perspective on the Film Festival and Film Competition, inviting participation from youths aged 16-14, in the creation of ‘’shorts’’ with a view to highlighting consciousness about anti-human trafficking.

Ada Brachou, Ph.D researcher gave a news update on the latest statistics on Human trafficking across Europe and the key challenges to surmount.

Annie Bannister, Ana Stakaj and Rachel Sweetman shared snippets of films which will be screened at the Film Festival and Simon Teague gave a most helpful overview of the structure of film festival and how to prepare further submissions for the Film Competition.

Imelda held an open conversation with 3 other RENATE members (Ada Brachou, Claudia Conroy & Annie Bannister), on the concerns for raising as much awareness as possible about  human trafficking, amongst the younger population, who are becoming increasingly vulnerable due to online exposure during this time of COVID-19 pandemic.

For those of us who have never been to the BAFTA Centre, it was fascinating to see a short overview of the BAFTA building and RSA building where event will be held and whetted our appetites for the opportunity to enter the Film Competition and attend the Film Festival next year!

We look forward to your participation in the Film Competition and encourage your engagement and support.

To review the YouTube recording of the event: https://youtu.be/6JRwHMKNY7A

Full details of the Film Festival event & competition at: www.renateevents.net

Film as a medium of awareness-raising.

Remember, now is the time to prepare and send short films (4 minutes maximum) to be considered at the RENATE Film Festival, taking place at BAFTA and the Royal Society of Arts, London, UK  to mark the European anti-Human Trafficking Day, 18 October 2020. RENATE invites students aged 16-24 years to join in RENATE’s mission, using the following slogan and #tags as themes for short films (four minutes):

Slavery – Human Trafficking – Near YOU!

Full information about submitting films, news about the festival and the link to the RENATE Film Competition are available on the newly established RENATE Events website https://www.renateevents.net

Use of the medium of film, is gaining traction in the anti-human trafficking world. Wells of Hope– the award winning documentary film about the Talitha Kum network in the Middle East,  is set for continued wider-audience engagement as it will be screened at some major film festivals such as the ‘WOW Film Festival’ in Jordan and the ‘Al Bahr short Film Festival’ in Malaga in the coming months.

Lia Giovinazzi Beltrami, who directed Wells of Hope , brought further acclaim to the film, having been awarded Best Director for the film.

The documentary is now available to view and download via donation, at https://donorbox.org/wells-of-hope.  In making a donation, you will be supporting Talitha Kum in continuing to care for the survivors of human trafficking and exploitation in addition to supporting the formation of the Talitha Kum networks in Africa and Asia. 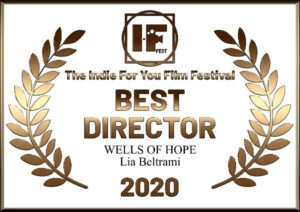