Andrew West interviews Kevin Hyland at an event at Parliament House,  hosted by War on Slavery (War on Slavery). 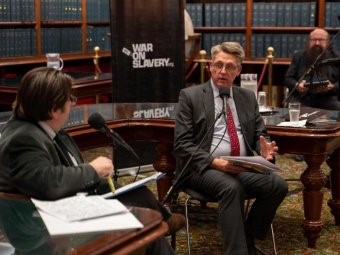 UK’s former anti-slavery commissioner Kevin Hyland, OBE, has been in Austral-Asia in July, meeting political and business leaders and discussing the crime of Human Trafficking and Exploitation.

Currently, despite being illegal worldwide, 40-45 million people live in slavery, one quarter of whom are children. Two thirds of modern slaves are held in the Austral-Asia region, the largest number of slaves the world has ever seen.

A panel of experts got together recently in New South Wales Parliament House, Australia,  to discuss modern slavery, forced slavery and human trafficking.

Log on to the following link, to hear Kevin’s interview with Andrew West of ABC  broadcasting studios, Australia.