Address by Sr. Gabriella Bottani to the OSCE Alliance’s 20th Conference against Trafficking in Human Beings. 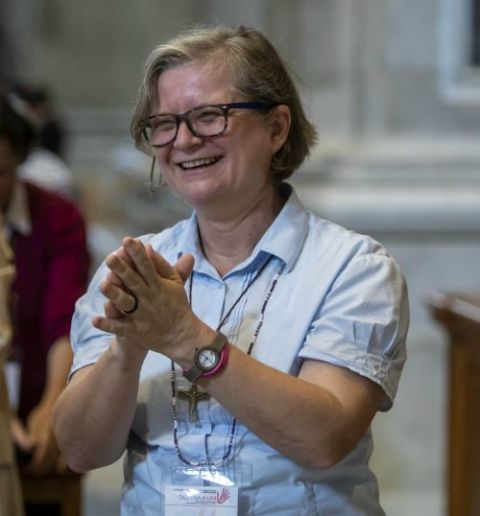 Below is Gabriella Bottani’s address.

I am honoured to share the experience of Talitha Kum, the international network of Catholic sisters engaged in combatting human trafficking. Since 2009 Talitha Kum has been working to consolidate the network; to train sisters on how to deal effectively with victims of trafficking; and to engage with external actors to promote the dignity of the survivors and of those who risk being trafficked. Talitha Kum today counts 56 active groups, involving two thousand six hundred (2.600) sisters and collaborators who last year supported fifteen thousand five hundred (15.500) survivors. My reflections today are based on their accounts and reports.

We, sisters, meet victims in various contexts of vulnerability such as women and children exploited in the sex market, undocumented migrants, asylum seekers, people in detention, street children. We try to establish a trustful relationship, providing not only urgent assistance but also responding to their spiritual needs. We host them as our most welcome guests, as sisters and brothers.

When we, sisters, meet victims, we normally do not ask many questions. We know that we have to listen to the stories many, many times before the person is able to share the true story. Trust must be stronger than fear, stronger than threats, than shame. The person must be able to tell the raw, violent truth, and be able to bear its psychological burden. We listen to the pain, the broken dreams, the violence, and we also share the hopes, the resilience and courage that grow slowly.

Yet, in many instances, when these stories are reported to the police, somehow they seem never to be enough. It seems that it is not sufficient to show the scars, describe places, give names and sometimes be clearly caught in an exploitative situation.

It may sound like a paradox, but to be recognized as a victim, is hard work. When we deal with the bureaucratic legal procedures, we are usually confronted with the main stumbling block of proving that the trafficked persons are not guilty of other crimes, such as the violation of immigration laws, labour laws, family laws or other criminal code provisions. They must also prove that as trafficked persons they did not consent to their exploitation, which can be challenging at times.

I remember my first case. A group of women had been detained because of drug dealing. During several visits to the prison, one of the sisters became aware that these women had been trapped in situations of abuse of power, violence and exploitation. After studying the case, we brought it to the attention of the criminal justice authorities who, after the necessary investigations, recognized the women as victims of trafficking. These women needed to be looked at with different eyes; eyes able to go beyond the surface. This same situation occurs very often, particularly when the exploitation is the result of widely-accepted practices due to structural, culturally-based asymmetrical relationships, between employee and employer, woman and man, adult and child, national and foreigner, rich and poor.

Yet, even when victims are recognized as such, their situation can still be difficult. I think about those who are in need of prolonged assistance, because of the mental health consequences of being trafficked. I also think about the situation of foreign-born trafficked persons: the recognition of their right to stay in the host country is linked to the recognition of their legal status as victims. The two legal procedures often do not unfold in a co-ordinated way, which may result in further victimization.

The result is that trafficked persons often fall outside the safety net of criminal justice systems. These victims are those who cannot benefit from the assistance provided by governments and civil society organizations.

We, sisters, try to be on the side of each person, regardless of religious faith, life choices, political beliefs, legal status. This approach makes us a borderline, marginal group. We do our best to offer care and assistance, to promote education and work in compliance with the laws of the countries where we live and act.
Our experience confirms that a victim-centred trauma-informed approach to investigating and prosecuting trafficking is essential to ensure that victims enjoy protection, support services to heal the trauma and an adequate compensation for the suffered damages.
But it is not enough to achieve justice. Investigations and prosecutions need to identify and hold the whole trafficking chain responsible for the crime: those who recruit, who exploit, who earn from the exploitation, who corrupt and are corrupted.

Trafficking is an extremely lucrative business where too many interests intertwine. Victim too often bear the full burden. I am increasingly convinced that we need to adopt a complex approach to address affectively a complex crime such as human trafficking.

We live in difficult times. As a global network, Talitha Kum acts in a social and legal environment that is more and more hostile toward some social groups. It is increasingly difficult to reach out to victims who are in administrative detention as undocumented migrants, out of the justice system’s reach. It is increasingly difficult to assist individuals who are trapped in houses as domestic and sexual slaves or to warn individuals off accepting traffickers’ promises in communities plagued by violence, corruption, lack of opportunities and safety. The increasing marginalization of migrants, religious and national minorities, women and girls, provides fertile grounds for trafficking to flourish. And the recent pandemic has further exacerbated the situation.

Trafficking is not only a heinous crime against an individual. It is both the result and the cause of deep wounds in the social and economic fabric of whole communities and countries.

As Talitha Kum we are engaged in healing those wounds, trying not only to bring justice for trafficked persons, but to promote a more just way of living together. It is a difficult path that we walk everyday together with the survivors.