Photo in feature image by Adrien Bruneau on Unsplash

“The war in Ukraine is leading to mass displacement and refugee flows,” said UNICEF Europe Director Afshan Khan. “Children who are on the run are extremely vulnerable to exploitation and human trafficking if they are separated from their families.” Suzanne Laszlo, director of UNICEF Netherlands, speaks of “an acute child crisis”.

In order to prevent abuse of these children, the governments of neighboring countries and countries through which the children travel must cooperate more intensively and exchange information, according to UNICEF, the UN children’s rights organization.

The call is partly based on recent research, which showed that 28 percent of victims of human trafficking are children. In the case of the war in Ukraine, the organization fears that this percentage will be even higher, because the vast majority of refugees are women and children.

Hanging around
Indeed, UNICEF employees who are active at reception locations at border posts have already seen “shady figures hanging out at the border crossings”, spokesperson Valeska Hovener said in a response. “To ensure that these figures cannot reach the children, they really all have to be registered.” This includes emergency aid posts that have been set up, called blue dots because of the white tent cloth with blue dots of these posts.

“Children who are on the run are extremely vulnerable.”
Aid organization from under the Dutch Christian emergency aid cluster and the International Justice Mission warned in this newspaper against traffickers who try to abuse vulnerable refugees.

In the first three weeks after Russia’s invasion of Ukraine, at least 500 children arrived in Romania alone who were not accompanied by an adult – and the real number is likely much higher, according to UNICEF. In addition to fast and safe reception, the tracing of other family members and reunification is of great importance. This also requires more cross-border cooperation, so that the continuation of their journey can also be monitored.

The number of people who have fled Ukraine is approaching 3.5 million. Figures from the UN refugee agency UNHCR show that many people are still leacing the county, but also that the numbers are smaller than at the start of the Russian invasion of Ukraine. 90 percent of the huge group of refugees abroad consists of women and children. Men under the age of 60 must remain in Ukraine to fight against Russian troops. As the war continues, the refugees spread more and more across Europe. 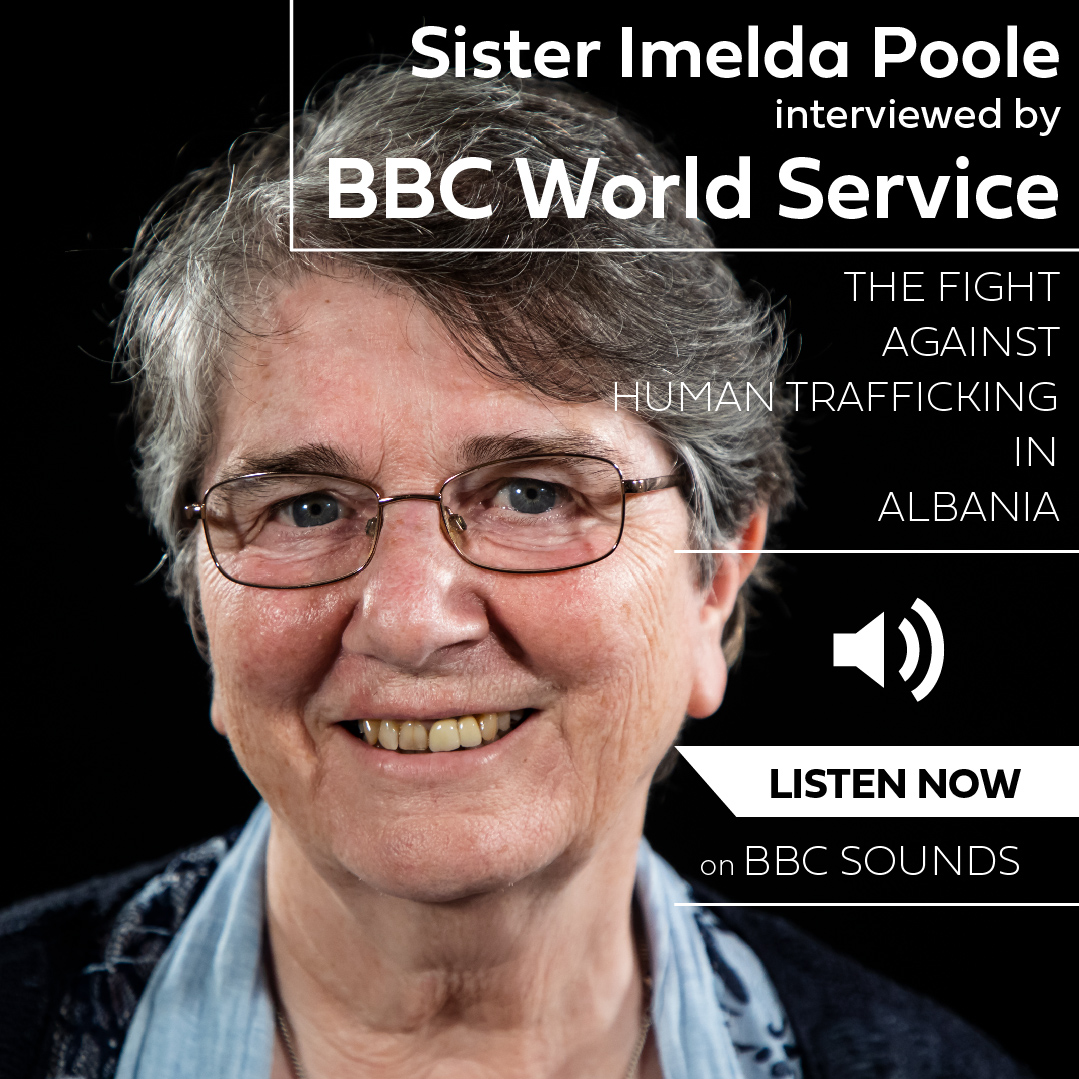 The BBC programme Heart and Soul was in conversation with Sister Imelda Poole IVBM in Albania on Sunday 27th March, about her work over the past 16 years, fighting human trafficking and supporting women and girls caught up in this crime.

Based in Albania, during the pandemic Sr Imelda noticed a new trend in human trafficking as people in poorer regions were struggling to pay their rent due to losing their jobs.

It came in the form of a compromise from their landlord; offer your daughter for sex or to be entered into the sex industry to clear the debt. Many of these girls were very young. Some were left with no choice, others, thankfully were able to make use of emergency Covid funding.

Stories like these are what Sr Imelda and her team at RENATE (Religious in Europe Networking Against Trafficking and Exploitation) are hearing every day, as they try to do what they can to rescue women from trafficking.

They are at war with the complex, and often vast, trafficking gangs who move women out of countries like Albania into Italy and other parts of Europe. They operate online as much as offline, using the dark web as a marketplace for people.

In this Heart & Soul programme for the BBC World Service, we met Sr. Imelda in Albania to hear how a nun from England ended up doing this work. We will talk to her about how her faith gives her the fire to keep fighting for these women, despite figures showing that the problem of trafficking is only getting worse.

During a recent visit to the Vatican, Sr Imelda met Pope Francis in a bid to highlight the plight of these women and show how the Church can help them.

The journalists for Heart and Soul met some of those who have been rescued and hear their stories. And they say: “We will visit the poorer regions of Albania and hotspots where the gangs operate.

Produced and presented by Colm Flynn for BBC World Service. 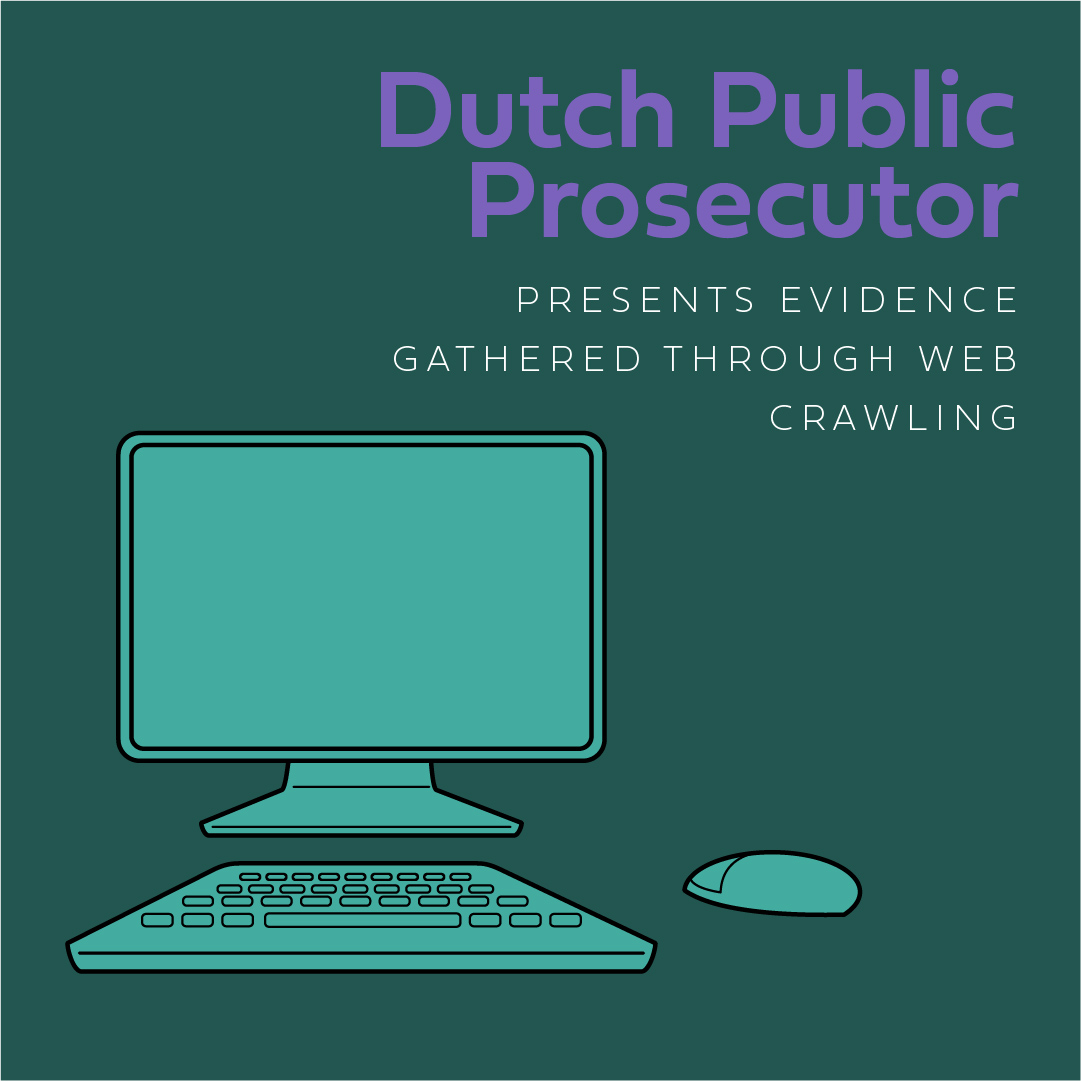 The Public Prosecution Service today demanded 36 months in prison against a 28-year-old man from the city of Kampen. He stood trial in Zwolle for making a 16-year-old girl work in prostitution. He is said to have helped her find a house to use for prostitution and drove her around for escort work.

This criminal case used evidence collected through the web crawling technique. When using this technique, the police automatically secure sex advertisements with signals of human trafficking from the internet.

Proposal in the House of Representatives
In June last year, a motion was passed in the Dutch parliament, requesting the government ‘to no longer postpone the widespread introduction of the web crawler to detect human trafficking’.

The National Rapporteur on Trafficking in Human Beings has also urged the police to have the web crawler implemented as soon as possible. The Public Prosecution Service has asked the Zwolle District Court to comment on the legal basis of the application of this means (and the legality of evidence obtained through this means).

Defendant says he did nothing criminal
“We call a person who helps a minor into prostitution as a human trafficker.” In his sentencing request, the public prosecutor emphasized that the suspect had committed a serious violation of the mental and physical integrity of the 16-year-old victim, while she also had to deal with an unstable home situation.

“Defendant did a lot of damage to the victim. He has used her to benefit himself financially, and in no way has he provided insight into the reprehensibility of his actions. In fact, he does everything he can to deny the criminality,” the officer motivated his sentence. 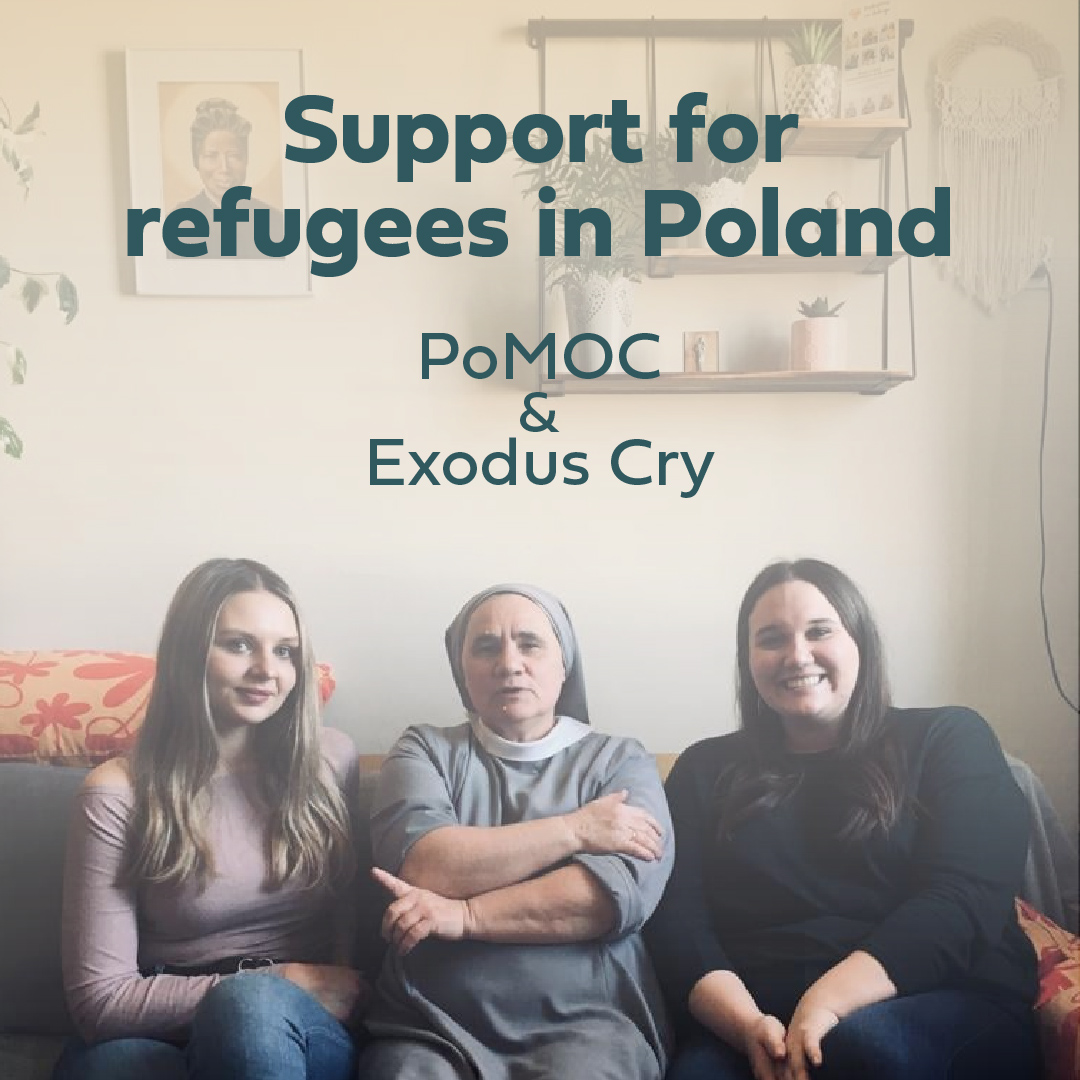 On Tuesday, March 22, Catherine working with Exodus Cry visited us.

Exodus Cry is an American organization that decided to support the Polish Migrants Organization for Change (PoMOC) Association due to the growing number of refugees from Ukraine on Polish territory and the threat of their use by human traffickers. The organization itself, just like us, deals with the fight against trafficking in human beings and helps victims of commercial sexual abuse.

Thanks to the action organized by Exodus Cry, we will be able to cover the costs of Polish language lessons for our guests from Ukraine, as well as other expenses related to the assistance provided.

We sincerely thank Exodus Cry for their support and Catherine for visiting us.

We look forward to hearing from Imelda Poole, who will be interviewed on the BBC World Service’s Heart and Soul programme this Sunday 27th March at 10:30GMT.

Sister Imelda will speak about the 16 year-long battle she and others have fought against Human Trafficking since the beginning of her work in Albania.

The programme will also meet some of those rescued and hear their stories first hand.

Please note that on Sunday 27th March the clocks go forwards by 1 hour in the UK for daylight saving time.

The programme can be listened to live online at BBC Sounds

Safety advice for those leaving Ukraine 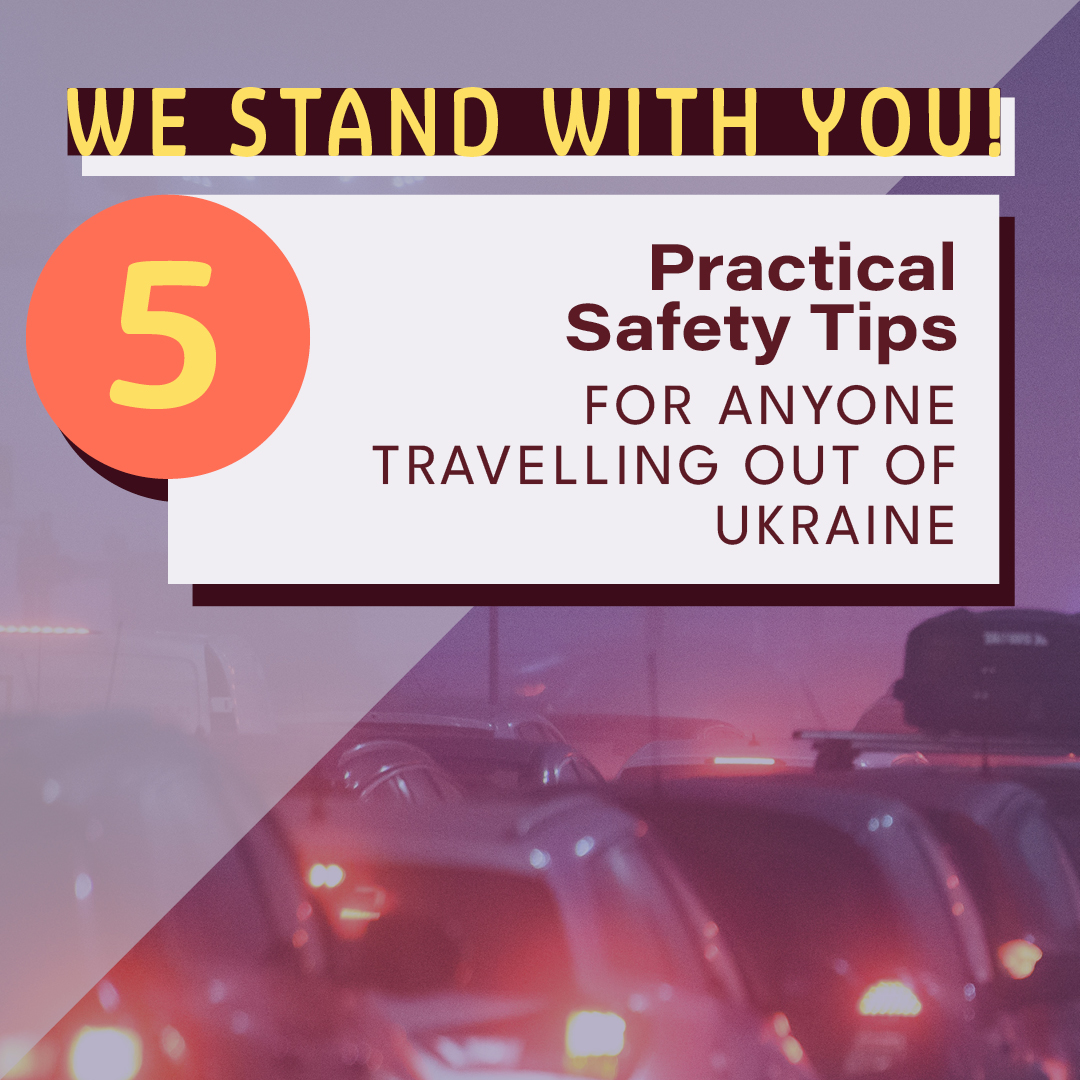 Anti-trafficking organization European Freedom Network has published the following practical advice for persons who are seeking refuge from the war in Ukraine, to ensure their safety while they are still in transit or recently arrived at their destination of sanctuary.

At a time when so many ordinary people are extending hospitality for displaced people, it is important to take precautions. The present situation could also present an oppurtunity for those with criminal intent to take advantage of people in vulnerable circumstances.

If you are reading this while on the move, or having recently left your home in search of safety, the European Freedom Network warns that not everyone you encounter may have good intentions. While accepting help from strangers may be necessary depending on your circumstances, the following actions will help protect you from the few who intend to do harm:

Please also see at the bottom of the below brochure, the list of anti-trafficking community contacts for 7 nearby European countries, verified by the European Freedom Network. 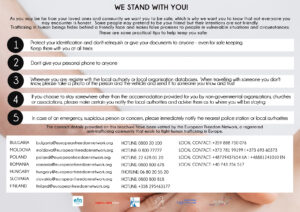 Since the full-scale invasion of Ukraine by the Russian military in February, more than two million refugees have fled the country. Although heartening scenes of generosity and hospitality have been demonstrated by neighbouring Poland and many other nearby countries receiving displaced persons across their borders, much work is needed to help these people gain a footing in the processes of claiming asylum and become better-established in their new communities.

The multinational task force is made up of lawyers practicing in several of the European countries receiving the highest volumes of refugees. Collectively, they muster expertise in these respective countries’ separate legal systems in migration law, human  rights and refugee law. These experts are offering free advice and assistance in collating documentation to help refugees navigate their rights and processes of asylum within their countries of refuge.

EYBA have published a directory of contacts for the task force, which can be found here. 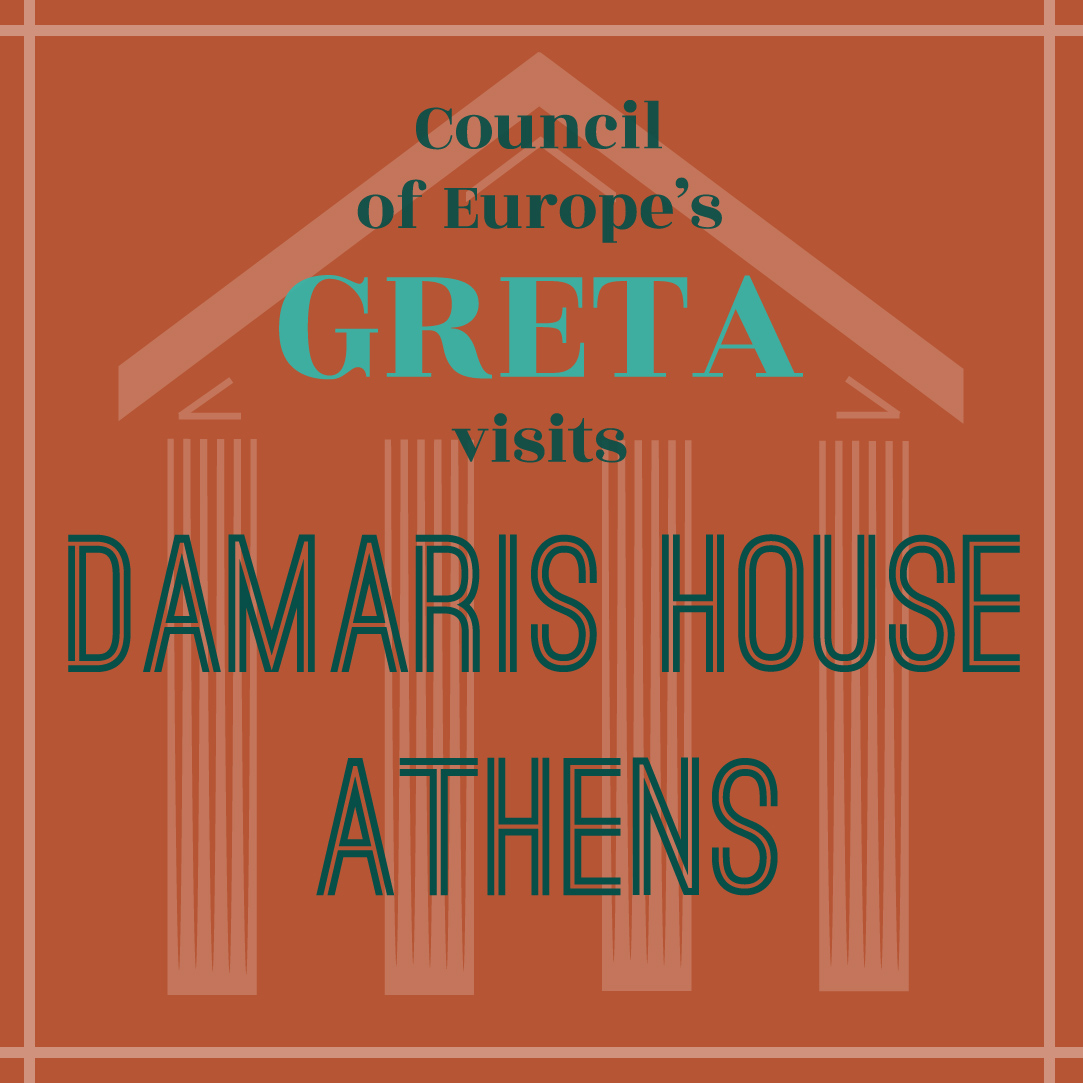 In the course of the visit, the GRETA delegation visited shelters for victims of human trafficking, including RENATE’s partner organization in Athens, Community House Damaris. 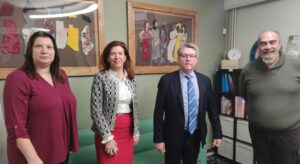 In light of the sudden dispersement of more than two million people fleeing as refugees from the war in Ukraine, the Organization for Security and Co-operation in Europe (OSCE) has published a series of recommendations for anti-trafficking prevention measures.

The recommendations are directed towards the governments of OSCE-participating States to take action to ensure the safety of refugees from traffickers. They highlight the increased vulnerability of the large numbers of persons in transit, mostly who are women and children, to become victims of human trafficking for criminal purposes such as sexual and labour exploitation. As well as immediate measures, the document foresees and addresses longer-term challenges such as integration of displaced people into destination communities, which the OSCE seeks to help governments to tackle.

The recommendations can be read or downloaded HERE in the OSCE’s online library of resources.

‘Women Against Human Trafficking’ International Webinar in Light of the “Laudato Si” and of the “Fratelli Tutti” Encyclicals: 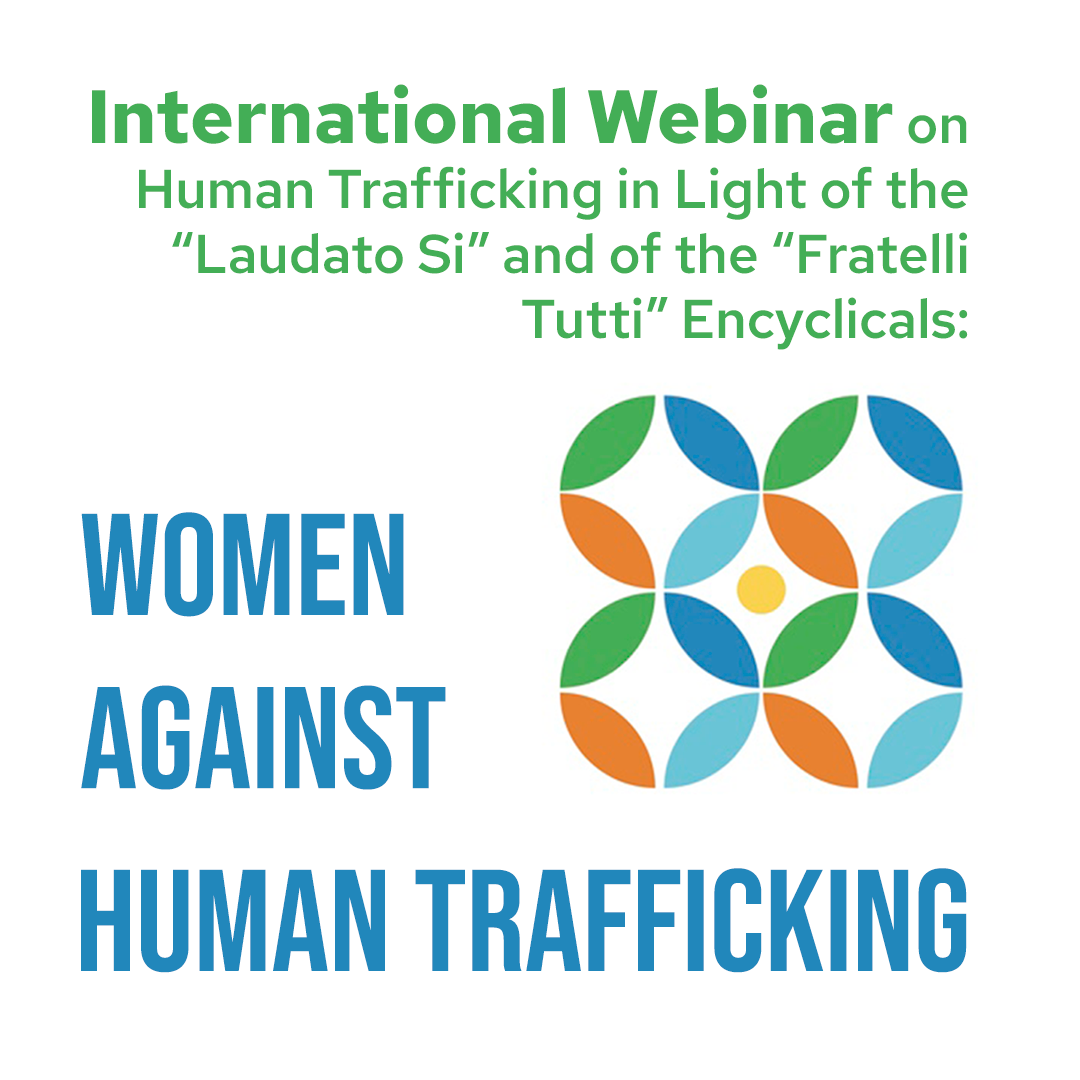 Access webinar recording here
INTERNATIONAL WEBINARS ON HUMAN TRAFFICKING
IN THE LIGHT OF THE “LAUDATO SI”
AND OF THE “FRATELLI TUTTI” ENCYCLICALS
On International Women’s Day 2022, this webinar brings together a panel of women who are making a strong commitment against human trafficking. They share their experiences in encouraging local communities and the international community to better defend victims of human trafficking.
Language: English
Agenda