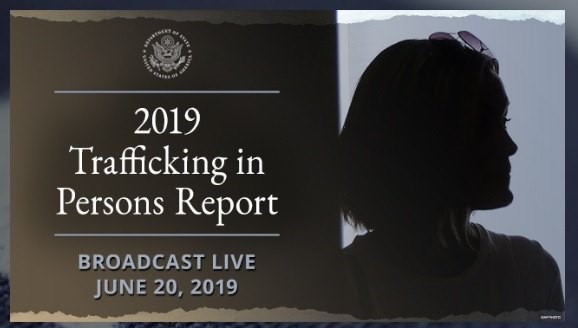 While the Report gives an up-to-date profile on 187 countries worldwide with regards to their addressing the crime of Human Trafficking, in launching the report, Secretary of State Mike Pompeo referred to the report as being also invaluable in encouraging every person in the world to actively engage in the work to bring an end to human trafficking and exploitation, saying ‘’Each one of us can be a champion for freedom and use our specific strengths to help eradicate human trafficking. Individuals can learn the common indicators for human trafficking and call in suspicious activities to the local or national hotline. Businesses can take meaningful steps to eliminate forced labour from their supply chains. First responders can enhance training and put in place screening to help identify trafficking victims. Government leaders can prioritize investigating and prosecuting labour and sex trafficking cases wherever they occur.’’

This call to action was echoed in the address by John Cotton Richmond, the US Ambassador at Large to Monitor and Combat Trafficking in Persons, inviting governments around the world to embrace the full meaning of the Palermo Protocol and implement their domestic laws in a manner that protects all victims and punishes all traffickers.

While each of us will be interested in the status of our own respective countries whether we have moved up/down a Tier or remain on the same Tier as previous years, there is a wealth of information in the report itself, which is broken into the following categories;

The National Nature of Human Trafficking, citing examples from Brazil, Cambodia, Ethiopia, India, Yemen, the UK and the US.

The Palermo Protocol and Transnationality.

Fundamentals of Implementing the Palermo Protocol.

Challenges and advances in Data collection.

Promising Practices in the eradication of Trafficking in Persons: Increased focus on Labour Recruitment.

Methodology of the Report itself- Tier Placement; a Guide to the Tier System; Funding restrictions for Tier 3 countries.

List of countries in the 2019 TIP Report that are not States Parties to the Palermo Protocol.

Watch live: Secretary of State Mike Pompeo delivers remarks at the release of the 2019 Trafficking in Persons Report:

On the occasion of the 10th anniversary of Talitha Kum, Gabriella Bottani, smc, is amongst those chosen as TIP Heroes of 2019. 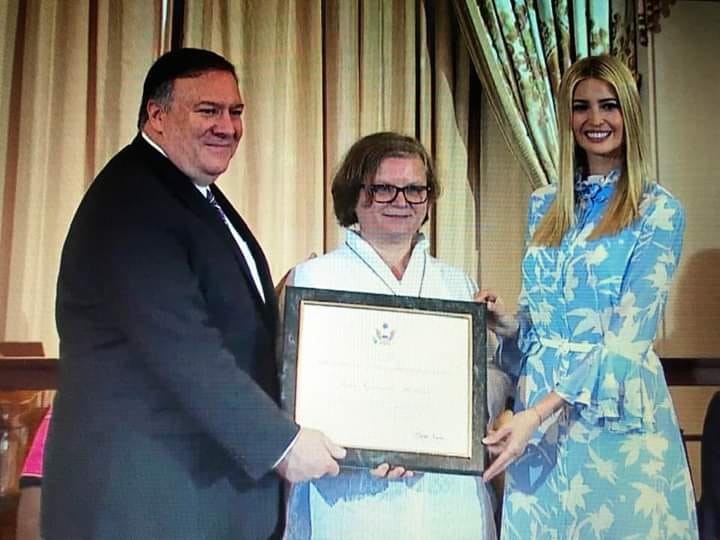 We rejoice with Gabriella Bottani, smc, coordinator of Talitha Kum on being recognised amongst the TIP Heroes when the TIP Report for 2019 was launched on Thursday, 20 June, 2019.

In her address, Gabriella acknowledged her fellow TIP Heroes, identified the underlying causes contributing to Human Trafficking which include unequal power structures in contemporary societies, with reference specifically to women, children and indigenous peoples; inadequate migration policies in an increasingly interconnected world and an economic model that exploits human beings and environmental resources for the benefit of a few in contrast with the exploitation of many.

Gabriella concluded her speech with an invitation to one and all to’’… courageously   raise the bar, and our dreams, in order to open new pathways toward freedom. This freedom is possible when it is based on a mutually transformative relationship, at the personal level, between survivors and anti-trafficking activists, and the organizations we represent, but also at the geo-political level, between countries of origin, transit, and destination. Let us stand up, together!’’

#Step with Refugees – World Refugee Day 20 June 2019. Following the Homing instinct ‘You can never find a house better than the one you had.’ -Jihad

Among the resources made available by the UN for World Refugee Day 2019 is this video story of Jihad and his family (1:39), available under the Resources tab at the following: https://www.un.org/en/events/refugeeday/index.shtml

Poor nations bear the brunt of the world’s 70.8M displaced.
Conservative estimates suggest violent conflicts, persecution and war forced approximately 70.8 million people from their homes last year — an average of 37,000 displacements each day, according to the Global Trends report from the Office of the United Nations High Commissioner for Refugees. Fewer than 7% of refugees were resettled last year, the report says. (BBC 19 June ’19).

Countless thousands have fallen victim to human traffickers. In their vulnerability and desperation for refuge, the displaced put their trust in anyone who offers the possibility of a safe haven…in the meantime, traffickers and people smugglers ply their trade….. 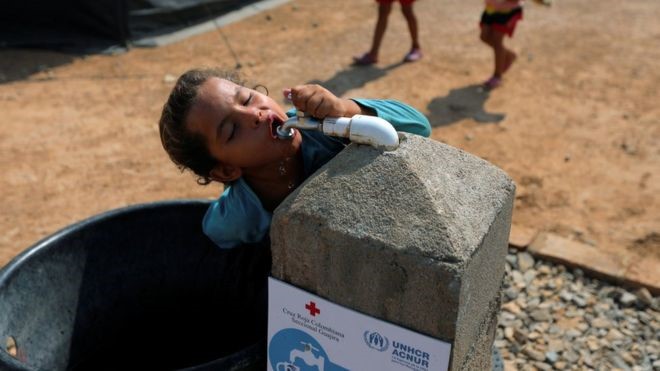 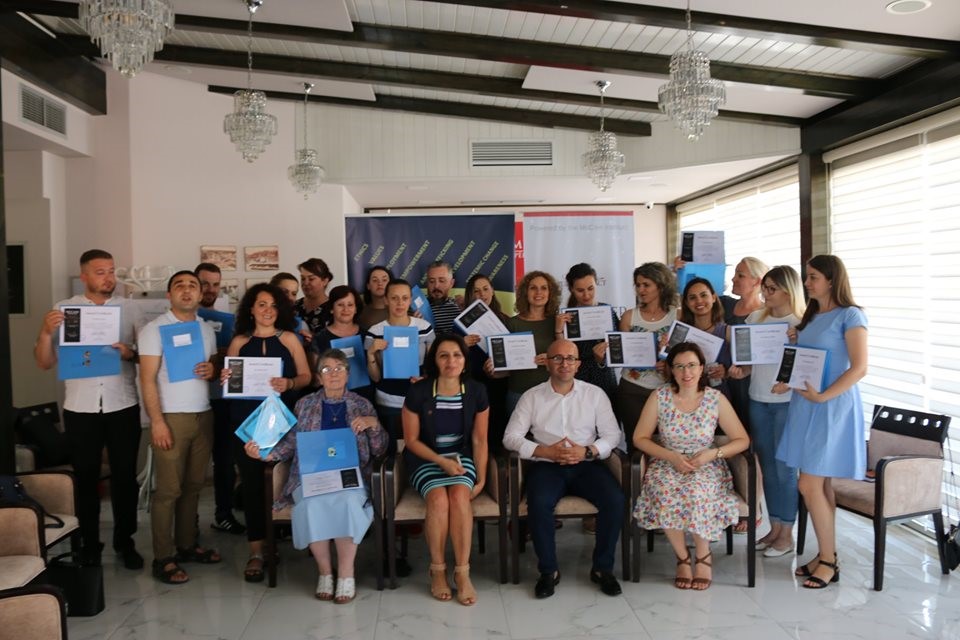 The final training day and ceremony concluding the Advanced Level of Character Driven Leadership Training and certificates were awarded to all staff members by Edlira Gjoni and board members of the Centre for Public Impact. Also present for the ceremony, via Skype, were Lieutenant General Benjamin C. Freakley USA Retired, Senior Advisor, and Ambassador Michael C. Polt, Senior Director of the McCain Institute.

Mary Ward Loreto Foundation team members are very thankful to Edlira Gjoni and the McCain Institute for International Leadership, for this outstanding opportunity for professional and personal development.

Through this training, the team is being transformed into advocates for common core values of integrity, responsibility, respect, trust, economic opportunity, freedom, and human dignity.

The third and final session of the Inherent Dignity Webinar Series entitled, ‘Prevention of Trafficking: What Governments and Individuals Can Do’ will take place on 25 June, 2019, from 7am-8am (New York time) (Your time here)

This session will provide concrete actions organisations and individuals can take to prevent trafficking. We will hear from anti-trafficking advocates from Canada, Ireland, Philippines and Australia.

In gratitude to Mercy International Association for sharing so generously with us across the world, collaborating in the work to combat human trafficking and exploitation.

Pope Francis has made the care of migrants and refugees a major focus of his papacy. No other religious or political leader has done as much as the pope in calling attention to the moral dimensions of the current refugee dilemma and in reminding the world of our shared obligations to others.

Produced by the Sisters at Global Sisters Report (GSR), this resource highlights the difficult journey of refugees around the world and shows how Catholic sisters are helping along every stage.

At every stage in the Seeking Refuge series, GSR found sisters and people working with them. They aid refugees in settlements and camps in Uganda and Jordan. They assist asylum seekers in the United States. They help resettle refugees in Europe and the U.S. heartland and find ways to work around increasingly hostile government policies designed to repel those who seek safety and economic opportunity. They restore dignity and a sense of hope to people whose dreams are dashed by deportation. For many, this is a decades-long ministry, but in the GSR reporting this year, there is a new urgency and a new inspiration. 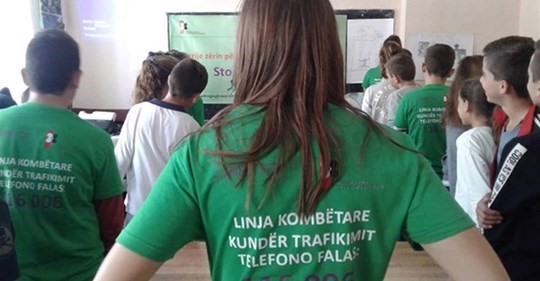 Albanians, especially the youth, are one of the most trafficked populations in Europe. Despite only having a population of 2.8 million, Albanian victims of exploitation are found in almost every country in Europe; the UK alone confirmed 1274 victims in 2017-18. These are the lucky ones who made it through the complicated government system. Countless more in the UK and all over Europe will never be recorded.

Youth unemployment hovers around 23%, meaning around a quarter of people between 16 and 24 are neither in education or work. Traffickers offering high salary ‘jobs’ in Europe easily prey on those who are concerned about their job prospects. But it is not just those out of work who are vulnerable; university students are increasingly being trafficked through the ‘boyfriend’ or ‘partying’ models. In these models, personal relationships, formed when students are first living away from home, are used to manipulate people into exploitation.

Informed by values-laden thinking and ethical leadership, the ARISE Foundation offer possibilities for grant-aided training and support to organisations which work to combat human trafficking and effect change at grassroots level.

Human Liberty 2.0 – We each are Every Day Heroes, with the Power to make a Difference.

A unique collection of stories that give hope in the face of adversity and illustrating how we each have the capacity and power to make a difference in the lives of the most vulnerable.

Until recently, responding to Human Trafficking was considered the task of the police. It is now recognised that healthcare providers have the potential to play a crucial role in human trafficking prevention, identification and intervention.

Trafficked patients are often unidentified due to lack of education and preparation available to healthcare professionals at all levels of training and practice. The medical sector is increasingly open to opportunities to attend training and awareness-raising regarding human trafficking.

In Albania, MWL staff have just completed presenting an intensive series of seminars on Human Trafficking – identification and action , amongst the medical professions in Tirana, centring on the provocative question ‘’Who is in your waiting room?’’

While human trafficking is a complex and pervasive human rights issue and crime, healthcare is one of the few places where victims encounter a professional in a safe setting and possibly have an opportunity to consider options to escape the trafficking situation.

It is likely that training and working with the medical sector will broaden and deepen RENATE’s reach in its efforts to combat and end Human Trafficking and Exploitation.

Fundación Amaranta Training with Social Welfare staff in Spain, on the topic of Child Trafficking.

RENATE members at Fundación de Solidaridad Amaranta send us news of a two-day training programme on detection of child victims of trafficking. The training took place this past week in Guadalajara, addressing a team of twenty five professionals from the Social Welfare Ministry of the Junta de Castilla, La Mancha, Spain.

Apart from the training itself, it was an opportunity to build networks and capacity amongst these teams committed to the human rights of minors, victims of trafficking. The two days also provided the opportunity for each to share from their daily experiences of contact with vulnerable groups. Fundacion Amaranta are especially grateful for the collaboration with Ms. Maria Del Mar Guerrero, of the General Directorate of Families and Minors.