There were two purposes to the reception. First, to help close the gap between frontline antislavery groups throughout Europe and lawmakers by bringing the two together. Second, to launch new research commissioned by RENATE Europe, undertaken by Revd Dr Carrie Pemberton Ford, Director, Cambridge Centre for Applied Research in Human Trafficking (CCARHT) and Research Associate with the Centre for Global Migration (Institute of Criminology, University of Cambridge), with assistance from desk-researchers and RENATE members in the field.  (www.ccarht.org and [email protected] ). 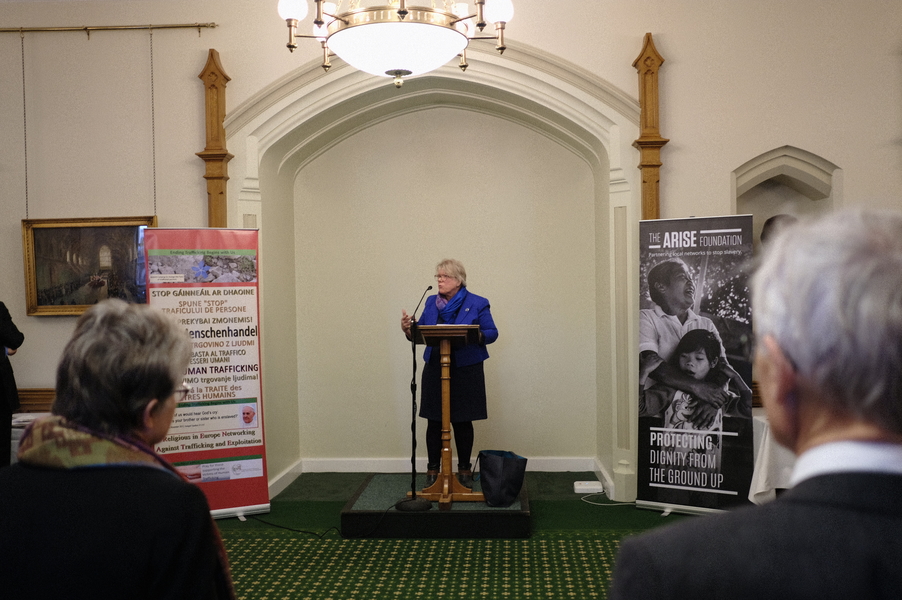 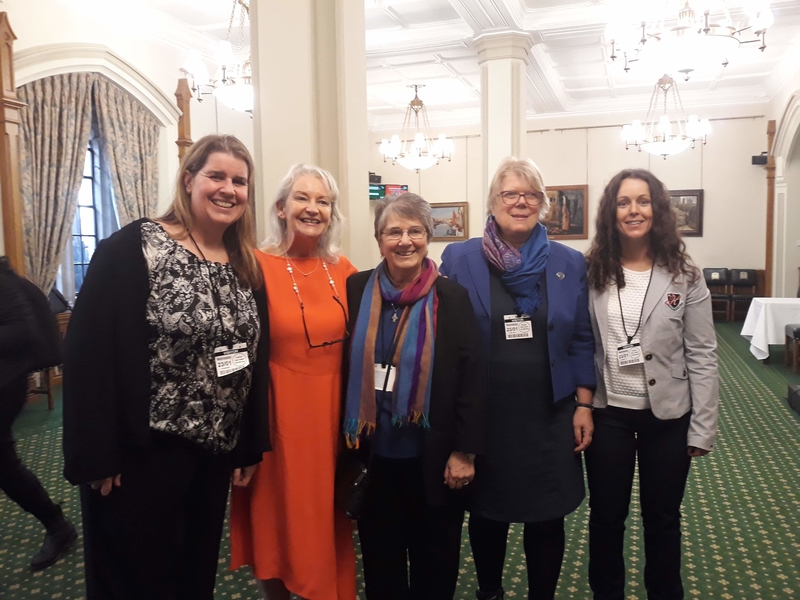 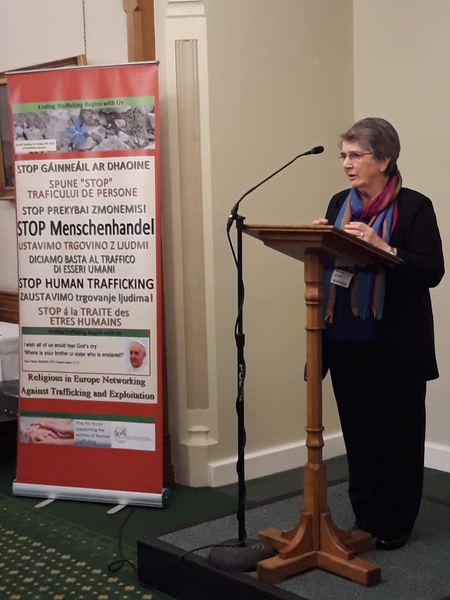 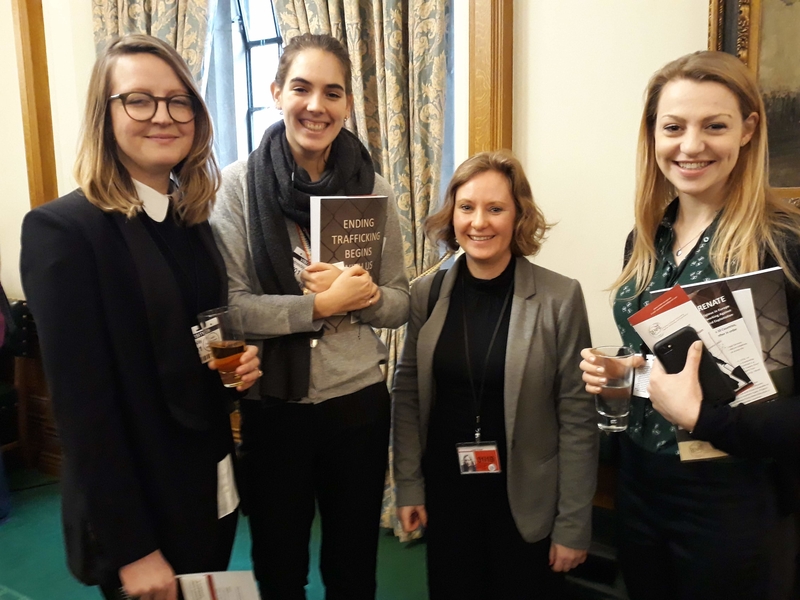 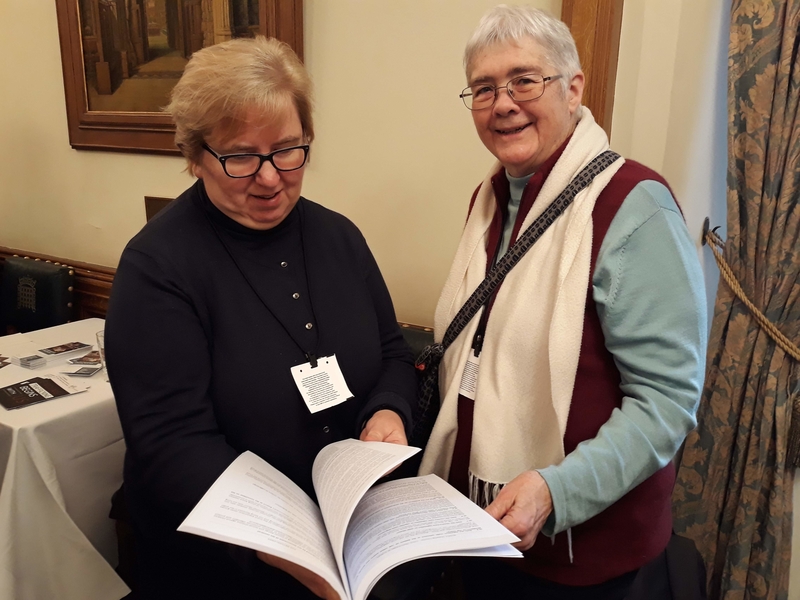 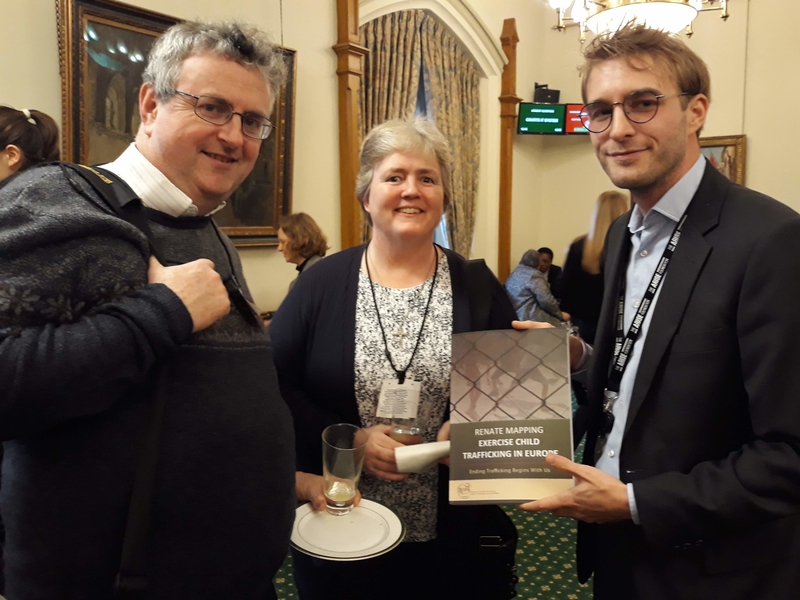 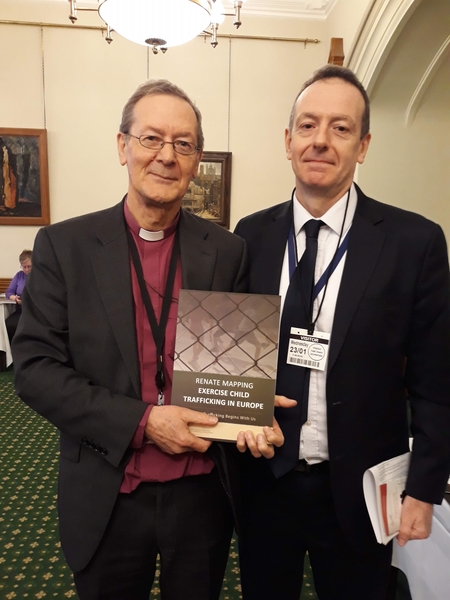 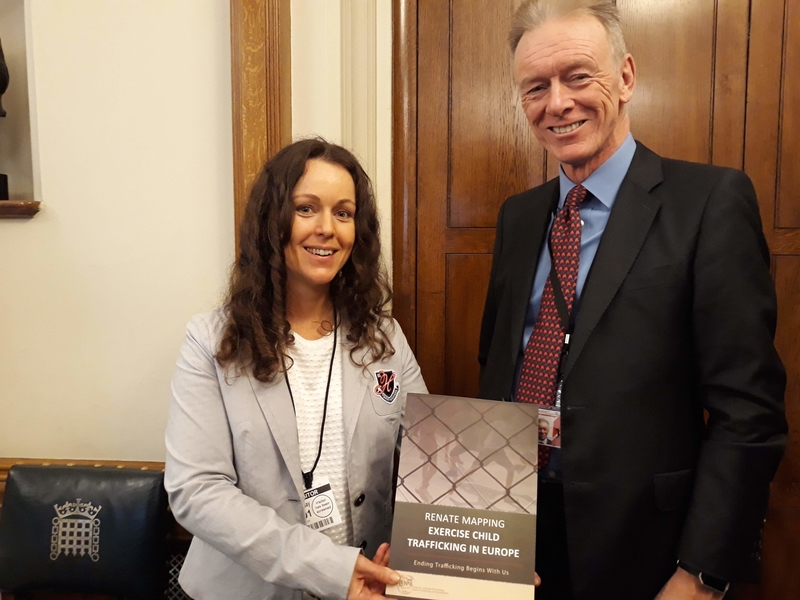 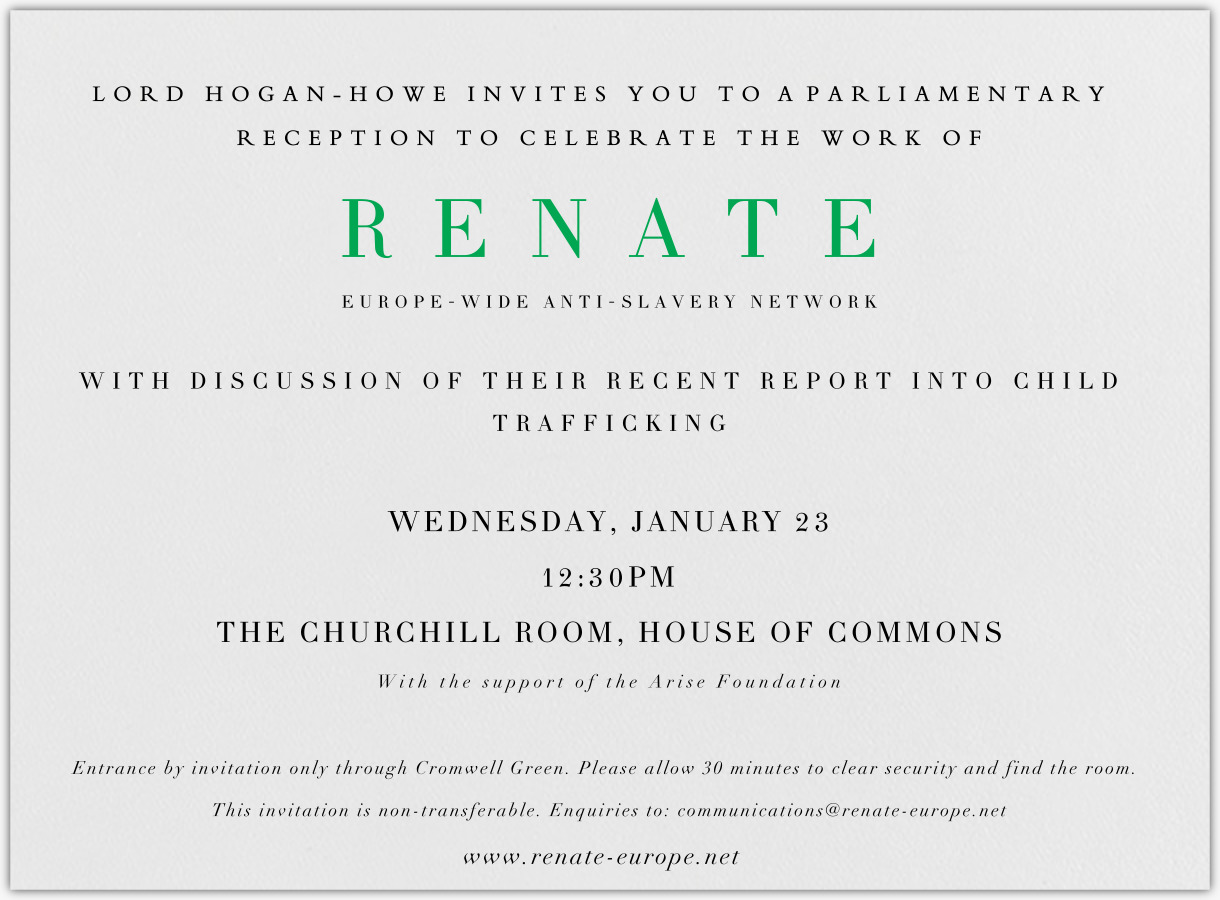 Lord Hogan Howe hosts a reception at the Churchill Room, House of Commons, in recognition of the publication of a Mapping Exercise on Child Trafficking in Europe.

Its findings are a wake-up call, with the authors concluding “… in none of the countries studied, were the measures of protection comprehensively adequate to the special needs of unaccompanied minors.”
More at: www.renate-europe.net post the launch.

The Migrants and Refugee Section (M & R) at the Vatican invites everyone to engage vigorously in learning, communication and action about preventing and healing Human Trafficking, nourished by reflection, prayer, and the teachings of Pope Francis.

Established by Pope Francis and under his direct guidance, the Migrant and Refugee section began functioning on 1 January 2017.

Tasked with addressing Human Trafficking as well as migrant and refugee matters, its mission is to assist the Bishops of the Catholic Church and all those serving these vulnerable groups.

To address the trafficking and enslavement of human beings, during 2018 M&R held two consultations with Church leaders, scholars and experienced practitioners and partner organizations working in the field. Participants exchanged experiences and viewpoints, addressing relevant aspects of the phenomenon. The Church’s full response was considered, in terms of strengths, weaknesses, pastoral and political opportunities as well as enhanced coordination worldwide.

The Orientations are for use by Catholic dioceses, parishes and religious congregations, schools and universities, by Catholic and other organizations of civil society and by any groups willing to respond. Besides their implementation in local programs as well as collaboration at a distance, the Orientations also offer key points for homilies, education and media.

The POHT is available in various languages and formats at:
https://migrants-refugees.va/trafficking-slavery/

The awards are a recognition of the work undertaken by Fundación de Solidaridad Amaranta to enhance the dignity of the human person and make a concrete difference to the lives of the most vulnerable and those living on the margins of society.

The Parliamentary Assembly of the Council of Europe (PACE), in partnership with the Vaclav Havel Library and the Charta 77 Foundation, has today issued a call for nominations for the 2019 Václav Havel Human Rights Prize.

The Prize, created in 2013, aims to reward outstanding civil society action in defending human rights in Europe and beyond. Candidates should have made a real difference to the human rights situation of a given group, been instrumental in uncovering large-scale systemic violations, or have successfully mobilised public opinion or the international community for a cause.

RENATE members may very well know someone worthy of a nomination!

The deadline for submitting nominations is 30 April 2019.

Full details are available at the Press Release here. 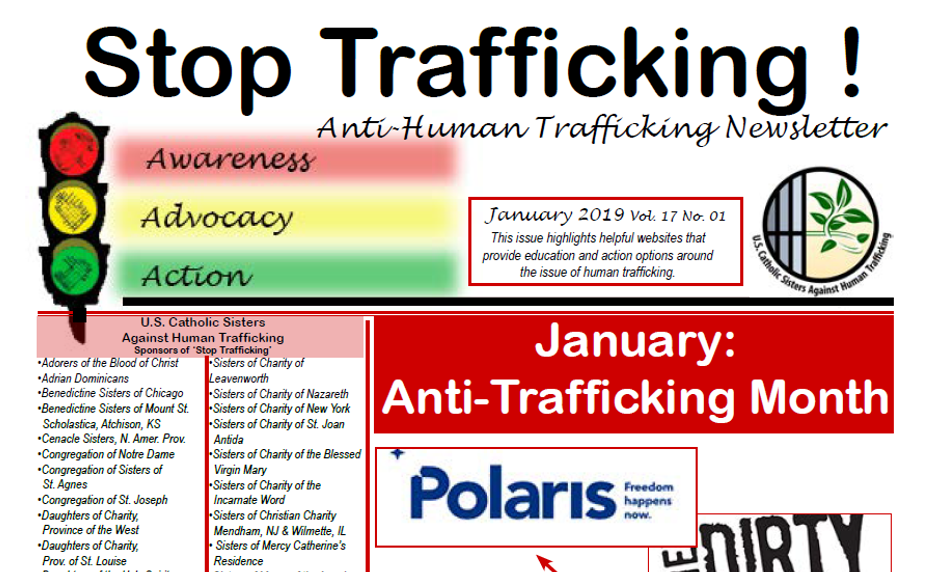 Theme: Together against Human Trafficking.

Log on to https://www.talithakum.info/news/119/together-against-human-trafficking for prayers and resources to help us mark the day together.

Below you will find also some prayers:

Each year the Medaille Trust sets aside the feast day of Saint Josephine Bakhita, the patron saint of human trafficking victims, to pause and reflect on the scale of the challenge and give thanks for the fantastic energies of those willing to come together to support victims and combat modern slavery. 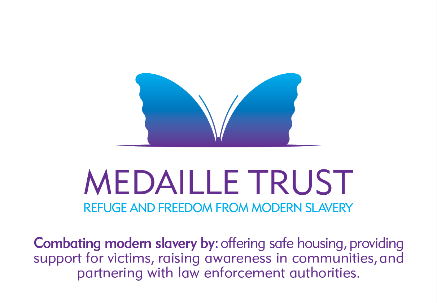 This year, St Chad’s Cathedral in central Birmingham will host an ecumenical occasion with music and spoken word to inspire and motivate everyone present, no matter what their beliefs or practice.

The evening will also see the launching ‘Look Up,’ the Trust’s six year awareness-raising partnership with the Archdiocese of Birmingham.

You are warmly invited to attend. There will be a drinks reception afterwards in the Grimshaw Room of Cathedral House.

Leader of the service: His Grace Archbishop Bernard Longley

A litany of hope! Ecumenical Afternoon Prayer on November 17, 2018.

Approximately fifty people were expected but many more people attended the celebration against violence against women on November 17, an initiative of Ivonne van der Kar (Sisterworks) in collaboration with the Conference of Dutch Religious, Mgr. Schraven Foundation, the Vincent de Paul Center, Bureau Mamre and the Network of Catholic Women.

Theologian Martina Heinrichs was the first speaker of the afternoon, in the chapel of the San Damiano City Convent of the Franciscans in ‘s-Hertogenbosch She talked about her visit to Thailand where she attended a meeting of the Fellowship of the Least Coin (FLC), an ecumenical movement of prayer for justice peace and reconciliation. The FLC supports projects for women and children in particular. She saw how touristic items were sold at a market in Bangkok, while young girls in bikini and high heels danced on the tables in the cafes and bars next to them. Youngsters, between 12 and 15 years old, recruited and bought in the north of the country, and boys who receive female hormones to develop breasts. But she also spoke about initiatives that combat trafficking in women.

After a coffee break, the Afternoon Prayer began with testimonies. Sister Medylyn from the Philippines spoke about sister Eustochia in Indonesia, who shelters women and children who have fled situations of violent exploitation. It is vulnerable work, but at the same time authorities get very nervous when Sister Eustochia is involved in a case.

Vincent Hermans and Piet Bots had each written a letter addressed to two Religious who were murdered in China in 1937 and 1938. Franciscan Father Jan van Heel just as well as Bishop Frans Schraven and his companions tried to protect the women who had sought refuge at their mission, against the Japanese army that claimed women for their soldiers. All of them had to pay for this with their lives: revenge for the Japanese loss of face.

The last story was from Maria Meinorah. In the Jeannette Noël house in Amsterdam, undocumented refugees are taken care of, including women and girls and their children. Maria is sometimes moved by the care that the women have for the children conceived by rape. She is shocked by the inevitability of sexual violence that migrant women face on their way ….

Franck Ploum led the Afternoon Prayer celebration and read the story of Susanna and the elders in Daniel 13. He noticed that – even though Susanna was acquitted – in the process only the voice of men counted. He illustrated that with a fable from South Africa that was both bitter and funny at the same time: the court-case between the duck and the fox. The fox says he has the right to eat the duck. The duck obviously does not agree and thinks that she is in her right. When they are in court, the duck sees that all judges are foxes.

Moving was the final statement, where churchgoers touched each other’s shoulders and together expressed:

I want to keep my eyes and ears open so that I can hear what women might not dare say.

I want to express so much confidence that anyone who is hurt and traumatized can come to me.

I want to contribute to a world in which justice is a large stream to which all people, all peoples, all people subordinate their own interests.

I want to be the echo of what women want to tell: their vision, their dreams, their strength, their hopes and what they have to offer, their desires, their fears and grief, their resignation, their anger and their tenacity.

I ask for blessing that I can accomplish this.”

We left the church while singing together the Magnificat of Taizé.