Wonderful acknowledgement last night in Rome by The UK Ambasdador to the Holy See, H.E. Ms. Sally Axworthy, of Imelda Poole’s visionary leadership in bringing others along with her in RENATE Europe, to work against Human Trafficking and restore dignity to the victims and survivors.

This event was in honour of the MBE awarded to Sr Imelda Poole IBVM. A press release and journalistic writings will be posted later. Stay tuned!

Council of Europe Debate: DEMOCRACY AND THE PEOPLE. 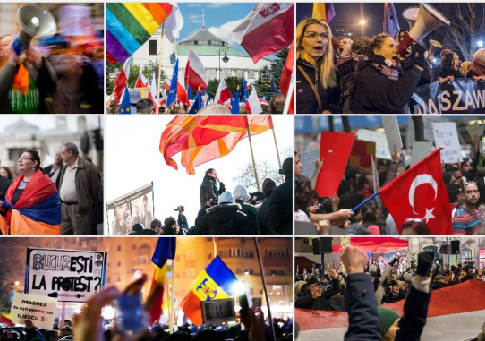 On 19 September 2018, to mark the International Day of Democracy, the Directorate General of Democracy and the Conference of INGOs organized a debate entitled: Democracy & “The People”, aiming to re-assert the value of our democratic institutions based on individual human rights, civic participation in public decision-making and the rule of law.

The keynote address by Yascha Mounk, author of “The People vs Democracy”, set the tone and the framework for this discussion, specifically that the values and institutions of democracy and human rights must be preserved and defended not only by capable leaders dedicated to the common good, but also with integrity and courage by engaged citizens.

Among the main remedies to the current trend away from liberal democratic values which Yascha Mounk highlights are:

Then several speakers, from both the Council of Europe and civil society, tried to give the framework of Democracy and described Campaigns which had been held in several countries (Hungary, Sweden, Ireland, Poland, Armenia…).

I wish to take the opportunity to thank Anna Rurka and Mary Ann Hennessey for helping the accreditation process and smoothing the path for a ground pass for RENATE.

Crossed perspectives 70 years after the universal declaration of human rights.

THE CHALLENGE OF UNIVERSALITY
Yesterday afternoon, 10 September 2018, RENATE member Marie Hélène Halligon, OLCGS, attended a Conference organized by the Permanent Mission of the Holy See to the Council of Europe.
This event was to mark the 70th anniversary of the Universal Declaration of Human Rights. Room 9 was full of priests and CINGO representatives… with a few women too!
In due course, we will have a copy of the speakers ‘talks.
It was most interesting to see the discrepancy between the theory and practice, presented by the speakers (Juridical and Political efforts to promote the universality of Human Rights) and questions from the audience. It was also interesting to note the lack of power afforded Regional legislation, regarding Human Rights, populism or the fact that the EU have yet to ratify the Declaration.
Notwithstanding the above, what I loved as a RENATE Representative was to meet with many known or unknown people after the event: Mgr. Paul Gallagher, the Holy See’s Secretary for Relations with States, Alessandra Aula (BICE) and other people of interest for RENATE to be best known in the Council of Europe.
Link to follow in due course.
Prepared by Marie Hélène Halligon, OLCGS.

”Human Trafficking: An Open Wound on the Body of Contemporary Society” was the keynote address by Kevin Hyland, OBE, former UK anti-slavery commissioner, at a presentation held jointly by MECPATHS and APT Ireland – with RENATE members, at Panel 5 discussions in Hall 7, at the World Meeting of Families on Thursday morning, 23rd August 2018.
In his address, Kevin provided an overview of how human trafficking pervades contemporary society and global and family responses required for healing.
By means of a series of PowerPoint slides, Kevin shared the understanding of what exactly human trafficking entails and how it manifests itself in various guises worldwide. He spoke about the following aspects: Women and children forced into prostitution, begging and drug-running; Factory slaves; the role society plays in contributing to slavery within the fashion industry; human slavery and exploitation within the car-wash sector.
With the increased incidences of world conflicts and the ensuing displacement of persons, we are seeing an increase in human trafficking. Kevin shared the statistical data currently available, citing 65.6 million forcibly displaced people worldwide- 22.5 million refugees worldwide; 10 million stateless people and 55% of refugees worldwide emanating from three countries- South Sudan, Afghanistan and Syria.
Kevin’s focus on our daily interactions which can often unwittingly contribute to human trafficking such as our use of car-washes; nail-bars; the need for cheap-clothing and even our ever-increasing demand for mobile phones. It was the latter which evoked emotive responses as we heard about the abuse of children as young as seven years old, trafficked and exploited in the cobalt mines   https://uk.news.yahoo.com/insie-congo-mines-exploit-children-210013559.html?guccounter=1
While money is the clear driver, the solution to prevention and ending human trafficking lies with society itself, specifically through community engagement, sustainable development and criminal justice/capacity building mechanisms.
In this regard, Kevin shared about the UN Global Goals for Sustainable Development and their capacity to impact on prevention and ending human trafficking. In particular, Goal 8.7 ” …Take immediate and effective measures to eradicate forced labour, end modern slavery and human trafficking and secure the prohibition and elimination of the worst forms of child labour, including recruitment and use of child soldiers and by 2025, end child labour in all its forms.”
Kevin’s presentation was followed by Maya, a young lady who is a survivor of human trafficking in the UK. All present were deeply touched by Maya’s sharing her personal story, which will stay with all of us and encourage us to make even greater efforts to bring an end to what Pope Francis calls ”…an open wound on the body of contemporary society.” (NCR, 10 April, 2014).

Encouraged by Pope Francis’ exhortation to bring an end to human trafficking and by his encouragement to young people to overcome fear and learn the warning signs of trafficking (CNA/EWTN News, Vatican City, 12 Feb. 2018 ) Members of APT/AMRI staffed stands 152 and 153 at the RDS throughout the Congress and delighted in the opportunity to meet with so many people, from both the national and international contexts.

The Congress provided a wonderful opportunity to raise awareness about Human Trafficking in all its guises and whilst we enjoyed the engagement with others, an abiding memory from the time at stand 152, was the extent to which so many people claimed to be totally unaware of human trafficking and unaware of the fact that human trafficking exists in ”our own backyard,” as opposed to occurring elsewhere but not in our own country….
In addition to conversations and real engagement, visitor to the stand were invited to help themselves to literature, information fliers and support gifts containing logos of APT and its partners, donated by Blue Blindfold (www.blueblindfold.gov.ie).
Without a doubt, we have reached a much wider, international audience as a result of our daily presence at the Congress and already we are receiving correspondence from those whom we met, requesting membership of APT or looking to make donations or inviting us as guest speakers at schools, parishes and local communities.
Whilst it was a productive and most enriching time, we are truly grateful for the possibilities of reducing the risks of human trafficking of young people, by virtue of the awareness-raising opportunities afforded us at the World Meeting of Families.
Anne Kelleher, RENATE Communications Person.

RENATE colleagues in Malta send us news of the following one-day conference they are involved in organising, with an open invitation to all to join them on 28 September next. * Please be advised that if attending, travel and accommodation arrangements are at your own expense and responsibility.

Combating Human Trafficking Today – Taking stock of evidence-based research and sharing experiences from Europe.
Aim: Human trafficking leaves no land untouched and is also happening around us. This conference seeks to provide answers to some of the most difficult questions relating to the trafficking of children and adults for commercial sexual exploitation.   The conference seeks to answer some of the pending difficult questions:
– What are the links between trafficking and prostitution?
– What do we know about sexually exploited women in Malta? Who are they? What led to their exploitation?
– Can the criminalising of the sex buyer reduce human trafficking?  – The Swedish Experience.
– In the context of existing legal models – What model should Malta adopt?
Date:  Friday, 28th September 2018
Venue – Lecture Theatre 2 (LT2) – University of Malta – Msida Campus.
Time:  09.00 – 13.30hrs
Organisers:  Dr Anna Borg (A4E) and Dr Anna Vella (Dar Hosea) in collaboration with the Centre for Labour Studies (CLS) – University of Malta
To secure your place please send a cheque for €25 , payable to A4E, c/o Centre for Labour Studies, Room 209, FEMA Building, University of Malta, Msida no later than 19th September.– Part of the proceeds will go to Dar Hosea and A4E.
Malta Conference 28 September 2018