The Annual Trafficking in Persons Report (TIP) released on Tuesday, 27th June, highlights the successes achieved in the fight against human trafficking and also highlights the continuing challenges facing the world, as the crime against humanity continues to flourish. Sobering statistics are cited, for example, with more than 20 million estimated trafficking victims worldwide, there have been less than 15,000 prosecutions in 2016 and 10,000 convictions reported by governments.
This year’s report places special emphasis on the importance of criminal prosecutions, not only as a deterrent to criminals but also as a testimony to survivors, that they matter. Countries are encouraged not only to increase the number of prosecutions but also to prescribe and impose sentences of such severity that they will deter others from engaging in human trafficking and exploitation.
Working closely with survivors was identified as being of significant importance, especially in trials to bring criminals to justice.
Governments worldwide are called to strengthen protections for victims, especially so that they are not penalised for crimes they had to commit as a direct result of human trafficking. There is also the recommendation that any criminal records attached to a victim for crimes committed during trafficking, be erased. The emphasis is on helping survivors secure the justice they deserve and return to a life of dignity and free will.
Full report available at https://www.state.gov/j/tip/rls/tiprpt/2017/
Prepared by Anne Kelleher, RENATE Communications Person.

At the invitation of and as part of the delegation of Andante, which has participatory status at the Council of Europe that RENATE are hoping to achieve, Marie Hélène Halligon, OLCGS RENATE Core group member, represented RENATE at the June meetings of the Council.  Both days were very full and interesting. On the 27th of June, Marie Helene attended two working groups, the first one considered Poverty and Social Rights, while the second working group focused on Migration to Europe and the Mediterranean crisis.
On the second day, the following topics were considered: Gender and Political Processes, Women mobilization in Europe and its impact in politics; Culture and Education Commission. The two-day meeting concluded with a welcome extended to the new NGOs.
Marie Hélène’s attended both days together with Dr. Mary McHugh, President of Andante and Sybille Bader, Andante’s permanent representative to the Council of Europe.
‘’ Marie-Helene has worked well with us and we have enjoyed her contribution to our delegation. This partnership can work well for the benefit of both RENATE and Andante,’’ said Mary.
RENATE is excited at this first step towards gaining full Council registration in the future.
More from Marie Hélène soon.
Prepared by Anne Kelleher, RENATE Communications Person.

Grace- A Play about one woman’s fight against Modern Slavery.

In Spring 2017, Ten Ten Theatre was asked by TRAC- a group of 16 Religious congregations of sisters from across the UK- to consider producing a new piece of work which helps young people to explore:

The issue of Modern Slavery;
The problem with pornography;
The dignity of the human person.
Following a meeting between Sister Patricia Mulhall (a founding member of TRAC), Martin O’ Brien (the Artistic Director of Ten Ten) and representatives of all the Religious Orders involved in TRAC, it was decided that Ten Ten would aim to produce a new theatre play for schools, following the huge success of their production of ‘’This is My Body.’’
This new play, provisionally titled ‘’Grace,’’ would differ from ‘’This is My Body’’ in the following ways:
It would tell a story about trafficking within the UK;
It would not focus on the victim but on the fight against slavery, making it more empowering for the audience;
It would be appropriate for young people aged 14+;
It would be easier and cheaper to stage.
Please consider helping The Ten Ten Charitable Trust to support this important project. To take this production to 25 Secondary schools in Spring 2018 will cost £15,000. Ten Ten has already generated £5,562.50 plus it is anticipated that £6,875 will be raised through fees charged. Therefore, our current fundraising target is £2,562.50. We aim to raise this by August 2017 in order to enable the project.
For more information see:
www.tentencharitabletrust.co.uk/current/
To make a donation, see
www.tentencharitabletrust.co.uk/donate/
Patricia Mulhall, csb. 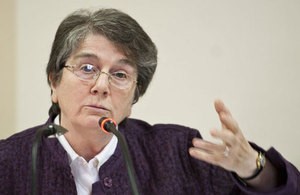 In an interview with Manx radio on 18 June 2017, Imelda speaks of her experiences as a Catholic Religious sister, working on the margins in Albania with the most deprived women and children, amongst beautiful people who struggle to secure a better quality of life.
The interview is on the ‘’Praise’’ morning show, at approx. 0:08.52 on the metre.
http://www.manxradio.com/radioplayer/od/7898/
Prepared by Anne Kelleher, RENATE Communications Person.

Fr. Shay Cullen, a member of the Irish Missionary Society of St. Columban and founder of The Preda Foundation since 1975, reflects upon the successes gained in the fight against child abuse by means of the World Wide Web.
Nominated three times for the Nobel Peace Prize, Fr.Cullen, 72, has worked protecting women and children from sex slavery and promoting human rights, peace and non-violence in the Philippines since 1969.
Full article at: Success Against the Child Abusers Online- Fr. Shay Cullen.
Prepared by Anne Kelleher, RENATE Communications Person.

The film aims to expose the figures and the mechanisms used to treat women as mere goods, by showing step-by-step how criminals create a business that generates $32, 000,000,000 per year. In the sex-trafficking business, everything is a profit as the body of a woman can be sold many times a day, with or without the woman’s consent. Themes examined in the film include the export business, economic exploitation, feminisation of poverty and the impact of the post-colonial relations between Spain and South America.
Following the screening, a panel discussion took place comprising the film director, Mabel Lozano and Rocio Moran, director of APRAMP, a Spanish anti-trafficking organisation which features prominently in the documentary, Sarah Benson, CEO RUHAMA and Brian Killoran, CEO of the Immigrant Council of Ireland. The discussions were moderated by RTÉ Radio One Drivetime reporter Della Kilroy.
Iberoamerican cinema, which includes Latin American, Spanish, and Portuguese productions, has had a prominent presence at the most important international film festivals for several years now and several films have been recognized at some of the most important film awards around the world.

UPDATE ON THE INTERNATIONAL DEBATE ON CORRUPTION – VATICAN, JUNE 15th 2017.

Sixty people from all geographical backgrounds were invited by the Dicastery for Integral Human Development to attend the event.
Following the introductory speeches (Bishop Marcelo Sorrondo, head of the Pontifical Academy of Social Sciences and Cardinal Peter Turkson, in charge of the Dicastery) each person present was invited to speak on the topic, starting from his/her own experience. You can imagine the variety of expressions from such a diverse assembly: most were Italians as it was easier for them to come to the debate, but others from Europe, Africa, Latin America and Asia brought many perspectives which amplified the complexity of the question! Political, legal, substantive issues on the very definition of corruption, relations with taxation, exploitation of persons, migration, complicity – including ourselves – or the harmful effects on the most vulnerable people …
In the afternoon, the assembly had the task of preparing the concrete implementation
Frequently raised questions:

Many avenues have been opened:

A draft document will be sent to all. Suggestions will be welcome.
Edited by Anne Kelleher, RENATE Communications.

This week, June 18th, we have been in Rome representing RENATE along with 6 continental/regional coordinators of Talitha Kum in a working group facilitated by Pat Murray IBVM, the General Secretary of UISG and with Gabriella Bottani the Director of Talitha Kum. During this week, we have circled the globe looking at how effective the growing global network of Religious women and co-workers is in this desire to combat human trafficking.
We are looking more closely at the links between this global pandemic and the massive phenomena of the migration and refugee flows around the world.
We have become linked with the newly reconstructed major Papal commissions related to JPIC such as the Refugee and Migration Council, the Laity and Women’s Council and Caritas Internationalis.
Good communication and the sharing of information and best practice has been the hallmark of the week. The constant challenges in the work have been shared and guidelines have been written as the means for all protagonists to ensure immediate communication and transfer of information for fruitful outcomes in the work.
We try so many new ways of developing strong networking and to help our work to become a little more effective.
At present on a lighter note, as I write this short report, I am sitting in a coffee bar after early morning Mass at The Gesu. You were all remembered. Our meetings for the week have been at the offices of UISG on Ponte Angelico overlooking the Tiber and the Colosseum. It is all very beautiful and very hot!
Imelda.
23 June 2017.