The 16 Days of Activism commence this Friday, 25 November 2016. The launch video for the #16Days16Stories campaign is now available. Commencing 24 November 2016, the video stories will be uploaded, one story per day until all 16 are online.
The videos is available on http://www.16days16stories.online
These videos have been prepared for the sole purpose of education and Anti-Trafficking advocacy in line with the United Nations 16 days campaign to end violence against women.
How to use these videos and suggestions for where to share them are included in the attached document (PDF)
Read about the background to this campaign here
http://www.mercyworld.org/mercy_global_action/project-update.cfm?pid=CE6358EE-EAB7-773C-EC387D98580E1095&jeid=649E1A76-ADDD-AB62-04E566AD86E5856F

This is the third year of the film festival Together against Trafficking.  After two previous succesful  years in Bratislava, the capital of Slovakia, and Košice, the second largest city in Slovakia, we decided to bring the festival to Banská Bystrica in 2016, as the region is one with the most frequent cases of human trafficking. The festival took place on Friday 21st of October, in recognition of the European day against Human Trafficking ( 18th October).

The film festival about a multi- bilion euro crime industry is unique to Slovakia. Each year, it takes place in a new location, with a different emphasis. This year we particularly focused on the stories of victims – Slovaks, who fell into traffickers´ nets and on the value of each human life, without exception. Films faithfully illustrate the effects of exploitation on the lives of the victims as well as the difficulties with regaining their self-value and dignity.

In spite of the intensity of the festival theme, presented via films, pictures and discussions,  the festival was surrounded in a strong atmospehere of hope, help and resistence against this phenomenon. We felt it in the new film MADE IN: God´s Image by the Slovak director – Sr. Iva Kúšiková – where the role of church is obvious in combatting Human Trafficking.

Another ray of hope was to be seen in the collection of photographs entitled Life after Trafficking, depicting 12 survivors who in their own words, conveyed a strong desire for a new life.

We felt empowered by the discussions with workers who actively help the survivors to overcome those sad stories. We are grateful for their zeal in fighting this problem. We are also grateful that they share their experience and knowledge which greatly helps in awareness raising so that oher potential victims might be spared and protected. Please click here to read the full report …

RENATE Members had a special meeting with the Holy See, on Monday, in the Vatican. It was a great honor for RENATE to have been received by Pope Francis and be able to greet His Holiness in person. This was a joyful day for each of us during the 2nd European Assembly week in Rome. 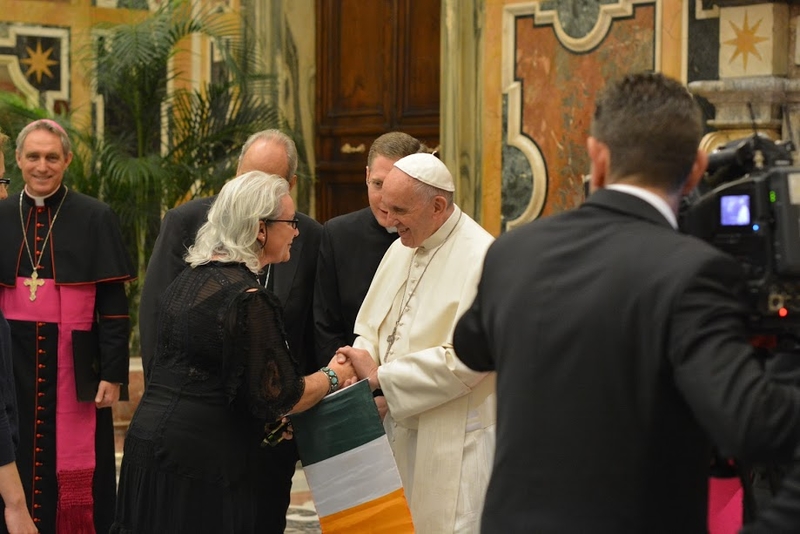 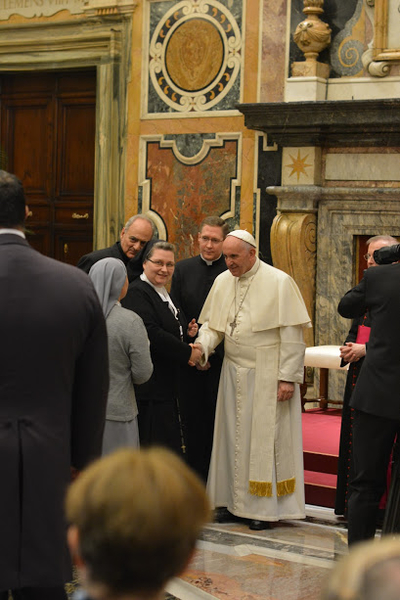 RENATE Assembly features on the US Catholic Sisters against Human Trafficking website.

Ivonne van de Kar, an anti-trafficking advocate from the Netherlands, is seen at the Vatican press hall with Sister Monica Chikwe, a member of the Hospitaler Sisters of Mercy, who works with trafficked Nigerian women, Nov. 4. (CNS photo / Carol Glatz)
Women religious are often the first people to discover problems emerging in society because they work directly with so many people in need, an anti-trafficking advocate said.
However, because religious focus more on providing assistance than publicizing their efforts, the rest of the world is often slower to catch on to where there is trouble, said Ivonne van de Kar, the coordinator of the Foundation of Religious Against Trafficking of Women in the Netherlands.
Please click here for more

Pope Francis: Modern slavery is a crime against humanity ( From Rome Reports)

These are religious around the world who fight against modern slavery. The president of this organization, RENATE, thanked Pope Francis for the opportunity to have this meeting.
https://www.youtube.com/watch?v=sXwOWTKzHY0
“Holy Father. We, RENATE, Religious in Europe Networking against Trafficking and Exploitation, we want to thank you for giving us your time and your presence in the midst of your very busy schedule.”
They not only greeted the pope with affection, but they also thanked him for his commitment to combat human trafficking and exploitation.
Pope Francis recalled that this modern slavery is a crime against humanity.
Please click the link below to read more:
http://www.romereports.com/2016/11/07/pope-francis-modern-slavery-is-a-crime-against-humanity
Posted on November 12th, 2016 By developer

RENATE (Religious in Europe Networking against Trafficking and Exploitation) has welcomed 130 members from 27 countries to Rome for their second European Assembly (6-12 November) where they are reflecting, learning, dialoguing and sharing best practices in their work to combat human trafficking and exploitation.

Among those attending the RENATE Assembly are Lynda Dearloversm (GB Institute, [email protected]), Mary Ryan rsm (The Congregation) and Denise Boyle fmdm (Mercy Global Action).
Sr Denise writes: ‘The highlight of day one of the RENATE Assembly (Religious of Europe Network Against Trafficking and Exploitation) was the private audience with Pope Francis in the Vatican. All the participants boarded the coaches with great excitement and anticipation. After a circuitous route to St. Peter’s that included security checks we walked through the bronze door into the Vatican. It was almost surreal waiting in the enormous corridor beyond this, watching the Swiss guards go through their routine and knowing that very soon we would meet Pope Francis.
Finally we were walking up what seemed like endless flights of marble stairs and into the papal audience room. The Clementine is a magnificent room with a beautiful high painted ceiling. A hush descended just before Pope Francis entered, followed by a burst of applause and an enthusiastic waving of national flags. Smiling almost shyly the Pope acknowledged our greeting as he made his way to a very simple throne like chair, centred on a red dais at the front of the room.
Imelda Poole IBVM, the President of RENATE thanked Pope Francis on behalf of the organisation, citing specific ways in which he has raised awareness of human trafficking, especially the suffering of those caught up in it. She went on to say that Francis has offered tremendous support for all those working to eliminate trafficking and who support and work with survivors. The Pope listened attentively and when Imelda finished speaking he jumped up and came down to greet her warmly.
In his response Francis began by offering ‘prayerful good wishes for the fruitfulness of these days of prayer, reflection and discussion.’ Reminding us that our Assembly was taking place during the Jubilee Year of Mercy, he spoke of the invitation to ‘enter more deeply into the mystery of God’s mercy and like the Good Samaritan, to bring the balm of that mercy to so many open wounds in our world. Pope Francis believes that among the most troubling of these open wounds is the trade in modern forms of slavery.
Acknowledging that much has been accomplished, Francis said that one of the challenges we face is indifference and even complicity plus a tendency by many to look the other way, because powerful networks of crime are involved. Francis thanked us for our ‘faithful witness to the Gospel of Mercy,’ demonstrated by our commitment to the recovery and rehabilitation of victims.
Revealing his understanding of the complexity of issues related to human trafficking Francis mentioned the ‘distinctive contribution made by women in accompanying other women and children on a deeply personal journey of healing and reintegration.’ He then shared his hope that our time together during this coming week, will help us be more effective witnesses to the Gospel, ‘in one of the great peripheries of contemporary society.’ Pope Francis concluded his address by commending each one of the group ‘to the loving intercession of Mary, Mother of Mercy,’ after which he gave us his papal blessing.

As the loud applause died down, members of the group presented Pope Francis with a St. Brigid’s Cross. This was accompanied by a scroll explaining how the different reeds woven into the cross reflect the 27 European countries in the RENATE network, who are all working to eradicate human trafficking.
There was more to come. With a big smile Pope Francis stood waiting as the first of the 133 participants were ushered forward to shake hands with him! When it was my turn I thanked him for his work against human trafficking and then said ‘I think you know my city Dublin, in Ireland?’ Francis nodded and then thinking for a moment said ‘yes, Milltown’ and laughed. (The Jesuit community in Milltown is where Francis stayed during the six months he was studying English back in 1980).’
Editor: Pope Francis’ Address to the members of RENATE can be read here
Messages to: Denise Boyle fmdm – Assistant Director MIA, Mercy Global Action

(Vatican Radio) On Monday, Pope Francis spoke out against human trafficking, in an address to members of RENATE: Religious in Europe Networking against trafficking and exploitation).
The group is in Rome for their 2nd European Assembly, which took place on Sunday.
The theme of this year’s assembly was “Ending Trafficking Begins with Us.”
Listen: http://www.news.va/en/news/pope-raise-awareness-about-scourge-of-human-traffi