The importance of collaboration and prevention are repeatedly emphasised in the Trafficking in Persons Report (TIP), issued 30th June, 2016.

Regarded by the United States’ State Department as ‘’…the world’s most comprehensive resource of governmental anti-trafficking efforts,” the 422 paged TIP report rates 190 nations – increased from188 in 2015, with the addition of Yemen and Libya this year – on how effectively governments are addressing the human trafficking industry.

“The purpose of this report is to enlighten, energise and empower. That is why it incorporates the insights of NGO’s, advocates and survivors with first-hand experience of this horrific crime. By issuing it, we want to bring to the public’s attention, the full nature and scope of the $150 Billion illicit human trafficking industry. We want to provide evidence and facts that will help people who are already working to achieve reforms and alleviate suffering. And we want to provide a strong incentive for governments at every level to do all they can to prevent and prosecute trafficking, identify and support victims and shield at-risk populations.’’ John F. Kerry, US Secretary of State. Please click here for more information…

END_OF_DOCUMENT_TOKEN_TO_BE_REPLACED

The UN first launched the Day against Trafficking in Persons on the 30th July, 2014, with the aim of raising awareness worldwide and bring an end to human trafficking.
Around the globe, the UN works with governments and communities to promote this day by means of various events and activities. The most famous of which is the social media campaign #igivehope inviting people to post a photo of a heart formed with your hands, to express your support to end human trafficking.
RENATE at the World Youth day gathering in Poland, is taking the opportunity to educate students and raise awareness amongst youth who are attending ♯the event. Through personal engagement and distribution of information posters and leaflets, RENATE members Adina Balan, CJ, from Romania and Klára- Marie Stráníková, SCSC, from the Czech Republic, are empowering young people through sharing knowledge and information.
The Spanish Conference of Religious, comprising Cáritas Española, Confer, Amaranta- Fundación de Solidaridad, Justicia y Paz and the Fundación Cruz Blanca, have issued a statement denouncing political situations that increase the risk of the vulnerable to falling into the hands of traffickers, as they search for a better life. We are reminded to ask ‘’Where are your brothers? Where are your enslaved sisters?’’ (GN 4, 9).
Full statement is available under ‘’Noticias,’’ at www.confer.es
The Sisters of the Incarnate Word Justice, Peace and Integrity of Creation Office in the United States of America, have prepared a prayer service to help focus our intentions and strengthen our resolve to end human trafficking. To read or print the prayer, please click on the following address http://saccvi.blogspot.pe/2016/07/prayer-service-for-july-30th-world-day.html
In Albania, the UN Gift Box Campaign, will be formally launched and opened by the Deputy Minister of the Interior, Elona Gjebrea, at 10.00a.m.on July 30th in union with the Global Campaign during this year’s World Day Against Trafficking. This campaign has been led by a network called ‘’United Response Against Trafficking’’ (URAT), comprised of NGOs: Peace Corps, Different and Equal, IRCA, SHKEJ and Mary Ward Loreto and Religious Congregations: Good Shepherd, The Company of Mary, Little Sisters of Jesus and IBVM(Loreto).
For an overview of how women religious have united to address human trafficking, an article by Anne Victory, HM and Ann Oestreich, IHM, members of US Catholic Sisters Against Human Trafficking (USCSAHT), makes for informative reading here
Prepared by Anne Kelleher, RENATE Communications.

RENATE member, Adina Balan, cj, is accompanying youth from Romania on pilgrimage to the festival and together with another RENATE member Sr. Klara Marie Stranikova, Congregation of Sisters of Mercy of the Holy Cross. Their focus is on raising awareness about human trafficking. Both Adina and Klara Marie intend reaching as many people as possible and have prepared fliers for distribution, to ensure people can be further informed.
For more, please click here to read… 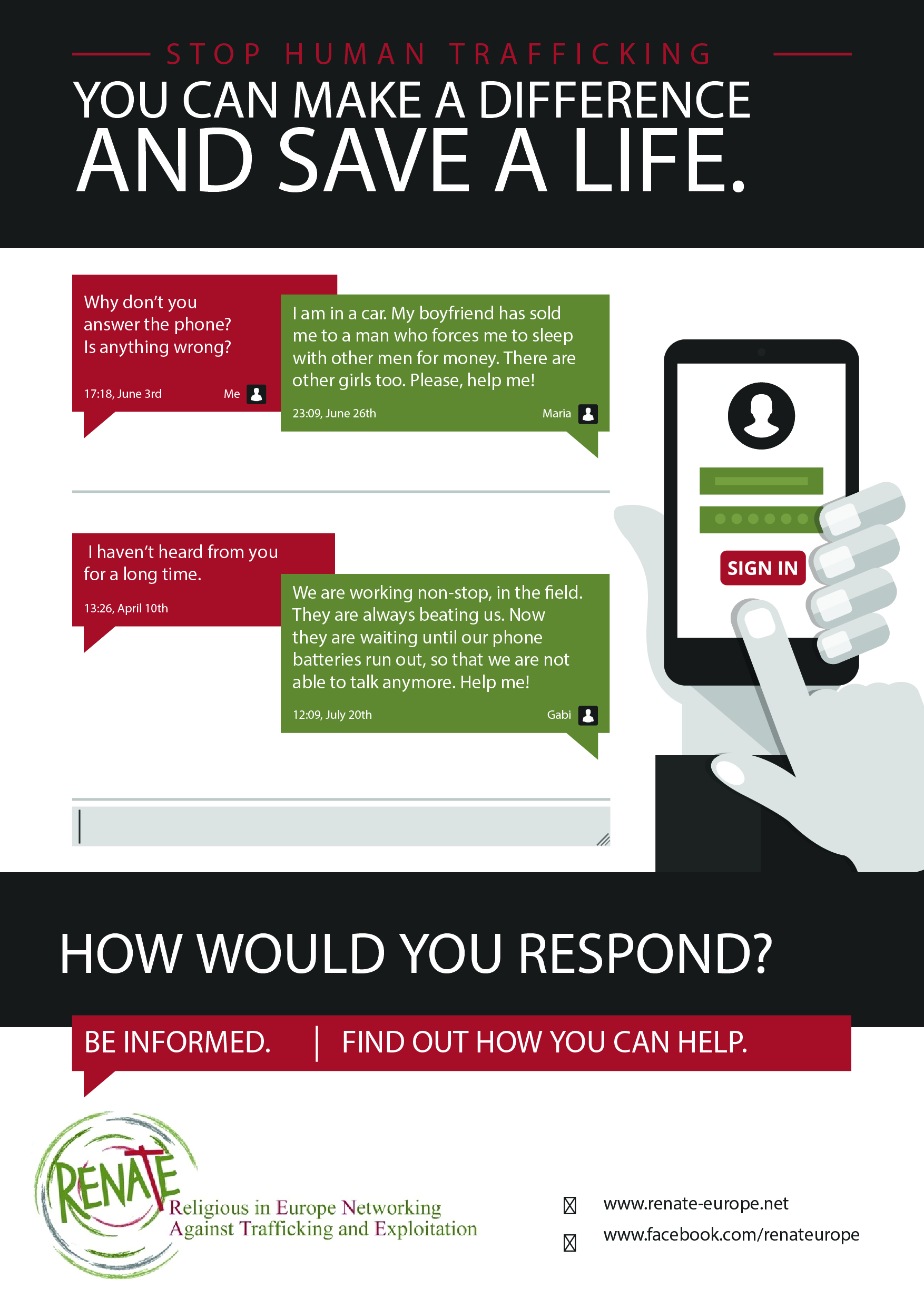 Address by the Apostolic Nuncio to the Holy See at the United Nations, July 2016. 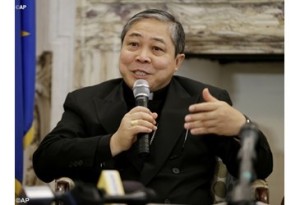 On the 13th July, 2016, the Permanent Observer of the Holy See to the United Nations, Archbishop Bernardito Auza, has told the United Nations the trafficking of children is abominable.’
“While human trafficking always exploits the vulnerable, the trafficking of children and youth exploits those most vulnerable of all, something that not only exposes the evil of trafficking in all its repulsive ugliness but something that likewise makes abundantly clear the urgent call for everyone to rise up to protect children, youth and everyone from those who would enslave and dehumanize them in these ways,” he said.
For the full text of Archbishop Auza’s speech, please click here to read…

RENATE welcomes all website visitors to read the eighth edition of its newsletter.
Your feedback will be very much appreciated.
Thank you.
Please click here to read the Newsletter

Summit of Judges and lawyers held at the Vatican, 3rd and 4th June, 2016, to discuss ways to combat modern slavery.

More than 100 members of the international judiciary, gathered at Casina Pio IV in Rome to attend a Vatican-sponsored summit in the fight against human trafficking.
The numbers of victims of modern-day slavery continues to escalate and it is now estimated that currently, 46 million people worldwide are bought, sold and treated as slaves.
Refugees and persons displaced because of war, terrorism and climate change are most vulnerable to traffickers. An International Organisation for Migration (IOM) survey conducted in March 2016, found that 7.2% of migrants travelling the eastern Mediterranean route reported encounters with human trafficking.
In his introduction to the summit, Bishop Marcelo Sanchez Sorondo, of the Vatican’s Pontifical Academy of Social Sciences (PAS), stated: ‘’ The global society needs a new beginning rooted in justice. No instance of justice can tolerate the violence of slavery or of organised crime, and no power must be allowed to corrupt justice…..Judges are called to be fully aware of this challenge, share their experiences an work together to open up new paths of justice and promote human dignity, freedom, responsibility, happiness and peace.’’
In addition to focusing on human trafficking, the summit also concentrated on organised crime, which is considered the main force behind modern day slavery.
The summit can be viewed on https://www.youtube.com/watch?v=gCKfSnOelq0
https://www.youtube.com/watch?v=3JoIGujOx8s
https://www.youtube.com/watch?v=99UKU1w5RYk
https://www.youtube.com/watch?v=Ic9XI6dwW2c
https://www.youtube.com/watch?v=jnROpP9SX9k

Multi-media drama and forum SEE ME! HEAR ME! Raises awareness about the voiceless victims of Human Trafficking.

As modern slavery exists in many guises and is gradually becoming more invisible, initiatives such as multi-media drama are playing a significant role in awareness-raising and helping us understand and assist vulnerable victims.

It is estimated that more than 45 million victims world-wide are without a voice, without representation. Robbed of their dignity, their suffering should not be hidden from us. As part of an awareness-raising campaign against human trafficking and modern slavery, the multi-media drama and forum SEE ME! HEAR ME! (https://www.youtube.com/watch?v=b1pJrgowZUs) was showcased in Zagreb recently, to give a voice to the voiceless and alert us to their silent cries. It is a drama where Kathleen Ann Thompson creates a compassionate and striking, surreal portrait of the victims, their traffickers and defenders.  Please click here for more information…

Founded by individuals from ten European countries, the Child Protection Hub is a professional community which ‘’…strives for a safe, nurturing and inclusive environment for all children.’’ Its implementation partners are:
The Regional Office of Terre des hommes in South-East Europe,
Terre des hommes –Albania & Kosovo,
Save the Children North West Balkans,
Know-how Centre for alternative care for children in Bulgaria,
Brave Phone in Croatia,
Terre des hommes – Moldova, Terre des hommes – Romania,
Centre for Youth Integration in Serbia,
Centre for Excellence for Looked After Children in Scotland (CELCIS),
The Hub acts as an interactive platform, where professionals can connect and exchange ideas and experiences, share resources and strengthen the community of those who work for the protection of children.
For full details on the Child Protection Hub, see www.childhub.org