The report highlights the poor level of trafficking prevention in conflict and post-conflict situations and the urgency of adherence to protocols which safeguard people who are already traumatised and rendered vulnerable through conflict.
The full report is available at: http://www.caritas.eu/sites/default/files/report_-_trafficking_in_conflict_and_post-conflict_situations_en.pdf
Prepared by Anne Kelleher, RENATE Communications.

RENATE welcomes all website visitors to read the seventh edition of its newsletter. Your feedback will be very much appreciated. Thank you.
Full text available here: RENATE Newsletter No.7_March 2016

The Gospel of St. Matthew includes an account of Jesus’ Sermon on the Mount, a list of eight blessings for those who are poor in spirit, meek, in mourning, hungering for justice, merciful, clean of heart, peacemakers and suffering persecution for justice’s sake (5:3-10). We know these blessings as the Beatitudes.
What if Jesus gave his sermon today? Recently the members of the Sisters of Mercy International Working Group on Human Trafficking reimagined the Beatitudes with a focus on one of the most debasing  and horrific scourges of our time: human trafficking.
Full text available here: Beatitudes – Contemporary Version from the Sisters of Mercy
Source: Sisters of Mercy of the Americas

Towards Better Social Cohesion and Tolerance in Times of Austerity
Conference organised by “Public Policy Exchange” (PPE)
Brussels, the 16th February 2016
The mission of PPE is to initiate and develop avant-garde platforms for capacity building, policy development and networking, and to serve as a progressive interface between practitioners, non-state actors and policy/decision makers at EU, national, regional and local levels in Europe.
According to the latest figures provided by Eurostat (2013), 122 million people were at risk of poverty or social exclusion in the European Union, a condition which refers to those who fall under at least one of the following categories: at-risk-of-poverty after social transfers, severely materially deprived or living in households with very low work intensity.
Certain groups in the population have emerged as particularly exposed to the risk of poverty, in particular children, young people, single parents, households with dependents, people with a migrant background, certain ethnic minorities and people with disabilities. Also, the gender divide is clearly visible and women are generally more at risk than men.
(…)
Full text available here: Tackling Poverty and Social Exclusion in Europe_report by Sr. Andrea Tillmanns, RGS

At the request of the Global Network of Women’s Shelters (GNWS), the Foundation of Women’s Shelters in the Netherlands and its partners organised from 3-6 November 2015 in Conference Center World Forum in The Hague, the 3rd World Conference of Women’s Shelters.
I was privileged to attend such an event where women and men, all around the world came to share their experiences and ideas with the ultimate objective of achieving an international approach to the prevention of violence against women and children. In total around a thousand people from over a hundred countries took part in the conference in The Hague.
The event was even more interesting and attractive by the presence of Her Majesty Queen Máxima. On the morning of November 4, 2015, Her Majesty Queen Maxima of the Netherlands held a keynote speech under the theme, Economic Independence of Women Survivors focused on the economic independence for women who face domestic violence which is the basis for building a new and independent life.
After the plenary session, Queen Máxima attended part of the ‘Effective social and economic reintegration of women survivors’ workshop.
Her Royal Highness Crown Princess Mary of Denmark also attended the conference on Thursday, the 5th of November. The crown princess gave a keynote speech during the plenary session entitled, Continents: What is Going On? Strengthening Global and Regional Networks.  Through The Mary Foundation she works to help women and children who are victims of violence.

International Women’s Day marked by the Committee on Women’s Rights and Gender Equality (FEMM) of the European Parliament
The EU Parliament in Brussels heard of the added traumas suffered by women refugees in recent months, in particular the practice of ‘survival sex’, where women are forced to have sex with the smugglers and mafia members transporting them to Europe from Turkey and Syria. 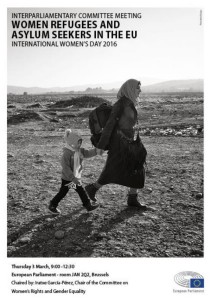 Survival sex among women and children is well-known, according to UN Women Regional Director for Turkey, Ingibjorg Gisladottir, but the incidence is hard to quantify as women rarely wish to record this for fear of recrimination and ‘dishonour’ among their families and communities.
Mary Robinson, former UN High Commissioner for Human Rights (1997-2002) speaking at the European Parliament in early March has condemned as “unconscionable” and “inhumane” the failure of many EU states to solve the growing refugee crisis and is urging all EU member states to “share the burden” of the hundreds of thousands of refugees crossing into Europe every month.
Mrs. Robinson pointed out that women face far greater risks of “violence, exploitation and trafficking” and are more vulnerable on route to Europe. Please see http://www.europarl.europa.eu/committees/en/femm/home.html for full information.
On the 3rd of March last, the Progressio Empower Team in London, held a photographic exhibition and a panel discussion, where they discussed their work in the context of the new Sustainable Development Goal for Gender Equality. They highlighted those who inspire them, their achievements in their fields and the challenges that remain around the implementation of this vital new Goal. Empower volunteers created this short film of the evening, to give us a flavour of the motivational discussion that took place.

The 8th of March, 2016, marks International Women’s Day, when we honour the immeasurable contributions women make to humankind. This year’s theme “Pledge for Parity” reflects the need for the continued pursuit of gender parity.

Log on to www.internationalwomensday.com for a global perspective on this international day.