Report from a Conference: The Religious & Migration in the 21st Century

The phenomenon of the 21st Century is the movement of peoples, whether by choice or otherwise. It is an extraordinary humanitarian emergency, where we are confronted with extraordinary challenges in trying to look for an adequate response. If we accept that migration is the ‘new normal’, then as Religious, we must ask ourselves: what is the Spirit asking us to do?
Anne Kelleher, RENATE Communications Person attended the Conference entitled The Religious and Migration in the 21st Century: Perspectives, Response and Challenges, held in Casa Generalizia dei Passionisti, Rome from the 22nd – 24th February, 2016 and shares some insights from the Conference.
Report from The Conference_The Religious and Migration in the 21st Century_February 2016

RENATE Board Meeting & Training on Advocacy & Campaigning in Hungary

A Training on Advocacy & Campaigning for the members of RENATE has now been organised and will take place in Máriabesnyő, Hungary, from 7th till 12th March 2016. The training will be led by Mrs. Ivonne van de Kar from the Netherlands. There will be 33 participants from sixteen European countries.


It is planned that during this time there will be an opportunity to experience the work of the Hungarian organisations working in the field of anti-trafficking and to learn from them of the challenges which they face and the actions being taken.
The members of RENATE are privileged to have the opportunity to become exposed to a new cultural reality.
Posted on February 29th, 2016 By developer

Amongst the winning films at the recently held Social Media Impact Awards (SIMA Awards), a number of films which cover the themes of exploitation of workers, prostitution, the migrant crisis in Europe and the ”jungle” at Calais, France were amongst the winners.
The films range in length from short (8 minutes) to full length (104 minutes), with the following being particularly relevant to our own work:
1. ”Dream Catcher” (104 minutes), about human trafficking, prostitution and exploitation. Awarded Best Director (Kim Longinotto).
2. ”The True Cost” (92 mins), about the human and environmental cost of the clothing industry. Jury Prize Winner & Special Mention Award.
3. ”Transit Zone” (32 mins), about refugees in Calais, France. Best Sound Editing Award and also received Special Mention.
4. ”Men Buy Sex” (8 mins), directed by Alice Russell. Best Creative Activism Award.
Video clips of the above are available on www.simaawards.org and also at [email protected]

“A Just Transition-Environmentally Sustainable Economies and Societies”
‘Time to share the wealth’; ‘New Economics’; ’Promoting environmentally sustainable economies and societies’; ’Bring people in from the margins’. These are just some of the statements that have been shared across the globe in recent days in honour of the World Day for Social Justice, 20th of February, 2016. International bodies such as the UN and the ILO (International Labour Office), Trade Unions and campaign groups took the opportunity to renew their calls for Social Justice to be prioritised by all governments and for a more equitable distribution of the world’s wealth, power and resources.
Increased armed conflicts around the globe and ensuing displacement of peoples, rising unemployment and growing levels of poverty continue to drive vulnerable women, men and children into the path of people smugglers and human traffickers as they try to pursue a better life for themselves and their families, usually in countries where they think the benefits of economic growth are available to all.
A new film The Divide (www.thedividedocumentary.com), which will premier in the UK in April, explores why and how the gap between the richest 1% in the world, continues to widen and what might possibly be done in order to end this trend. The film tells the story of seven individuals searching for a better life in modern day US and UK.
“The Divide creates a lyrical, psychological and tragi-comic picture of how economic division creates social division. It serves as both a call to arms, and a powerful waning. The film is inspired by the critically acclaimed, bestselling book, The Spirit Level, by Richard Wilkinson and Kate Pickett.” (The Spirit Level documentary)
Social Justice is an issue at the heart of RENATE’s ministry, in reaching out to the victims of human trafficking and exploitation, across Europe.
For more information, please see the “Social Justice in the EU Index Report 2015” at Bertelsmann.

On the Journey of Hope, HT from a Global to the Local Perspective

The Croatian Catholic Radio Station, in the Jesuit Refugee Service (JRS) greatly assisted in raising awareness about Human Trafficking through its recently recorded programme entitled “On the Journey of Hope”, which featured a number of guests, including RENATE member Sr. Stanka Oršolić, Croatian Red Cross worker, Ms. Nives Vudrić and Mrs. Djurdjica Kolarec, President of the Centre for Women in the War (ROSA), Co-Ordinator of the PETRA Network and member of the European Union Civil Society Platform against Trafficking in Human Beings.
Ms. Vudrić spoke of the challenges being faced in the Croatian temporary reception centres for refugees where staff are trying to identify victims of human trafficking. She also spoke of the sufferings endured by the migrants at the hands of migrant smuggling rings on the migrant routes.
Mrs. Kolarec spoke about her experiences over the last twenty years, providing assistance and legal aid to the victims of human trafficking. Of particular note was the increased use of the SOS Hotline in Croatia, for which Mrs. Kolarec is responsible.
The work of RENATE in awareness-raising and support of the victims of human trafficking was interspersed throughout the programme by Sr. Stanka, who spoke at length about RENATE.
It is hoped that more people will be encouraged to take action against human trafficking and that more victims will access the Hotline as a result of this public broadcast.
Tune in to www.hkr.hr where you can hear the full broadcast (archive: Na putu nade, 17th February 2016).

APT Ireland (Act to Prevent Trafficking) shared the following Resource Pack for Parishes, which has been designed and offered by the Sisters of the Divine Saviour (Salvatorian Sisters) in the USA. It suggests Liturgies, Prayers, sample quotations, information for Pastoral staff, recommends educational DVD’s and actions to address Human Trafficking. We hope that you will find it helpful.
Catholic Parish Resources for Stop the Traffic Campaign

Fr. Donal Dorr, Missionary Priest, Theologian & APT Ireland (Act to Prevent Trafficking) member, gives us an insight into why Pope Francis is a powerful advocate for those who have become enslaved through Human Trafficking, as suggested in the publication ”The Great Reformer: Francis and the Making of a Radical Pope”, by Austen Ivereigh (2nd edition, London: Allen & Unwin).
Full article at: http://www.aptireland.org/pope-francis-anti-trafficking-movement/

Imelda Poole, IBVM, President of RENATE is featured in this week’s edition of The Global Sister’s Report, a Project of National Catholic Report in the United States of America.
Interviewed by Sarah Mac Donald, a freelance journalist based in Dublin, Ireland, Imelda talks about her work in Albania and the work of the wider network RENATE, during this week which started with the 8th of February, the International Day of Prayer and Awareness against Human Trafficking.
Full text available here: Imelda Poole IBVM_Interview with GSR for St. Bakhita Day 2016

As Justice & Peace co-ordinator for my congregation, I sent a letter to all our communities , inviting the sisters to dedicate the next two weeks to Human Trafficking, under the title “Shine a light on Modern Slavery”.
Sisters from all over the world, were invited to reflect and get to know this reality better, to come closer to it, to pray for the victims and the traffickers, to open their eyes to discover the “slaves” that are near us and to get in touch with organisations that work with them, and if possible, to bring a ray of hope to those who are the victims of modern slavery.
Begoña Iñarra, currently in Rome, participated at the vigil organised by USMI – Conference of Major Superiors of Italy – on Saturday evening, 6th February. This vigil was followed by Mass on Sunday, the 7th of February, where prayers were said for the victims of human trafficking.
Afterwards, we all went to St. Peter’s Square, to hear the Pope pray the Angelus. Two young Africans carried a large photo of St. Bakhita, to St. Peter’s Square. It was a very special occasion for everyone present, as we prayed together in solidarity with all those who are victims of Human Trafficking and Exploitation.
Sr. Begoña Iñarra, Fundacion Amaranta, Spain

Press Conference in Croatia for the World Day of Consecrated Life, 2 February 2016 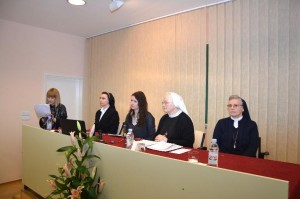 In honour of the World Day for Consecrated Life, the Jesuit Refugee Service (JRS), Croatia, held a Press Conference where the continuing refugee crisis and the importance of pastoral care of the Roma people was discussed.
Inspired by the evangelical values of Community Spirit; Acceptance and Solidarity, the JRS has been involved in providing help to asylum seekers, displaced people, migrants and refugees on the transit routes through Europe.
To date, more than 700,000 refugees have journeyed through Croatia since 2015.
Ms Jelena Firić, responsible for the JRS Legal affairs, delivered a presentation on the significant role and contributions of the JRS, which range from advocacy in public debates, the provision of legal assistance through to all forms of direct support in the camps and reception and detention centres for refugees and asylum seekers. The provision of several square metres of space specifically for the JRS within the camps has been especially helpful in providing a tranquil space in the midst of the chaos of the camps. 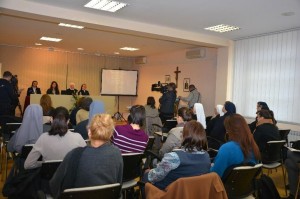 Mrs Martina Prokl Predragović, JRS Communications Person, read two powerful testimonies from male and female refugees, who spoke about their exile, concerns and hope for better life in the future. Mrs. Predragović stressed the importance of social media giving adequate space to these issues. This would greatly assist in awareness-raising and the finding of humane solutions to the crisis, in direct contrast to the repression of the situation which is occurring in the Near East.
Sr. Stanka Oršolić, volunteer with the JRS, spoke about her experiences volunteering in the refugee camps. She explained the connection between the refugee crisis and human trafficking, citing the shocking fact of the disappearance of 10,000 children along the migrant routes. As has been evident at bus and train stations in Italy, Budapest and elsewhere, many minors have been left alone, having lost family or friends along the routes. These minors are particularly vulnerable to human traffickers and smugglers. Sr. Stanka highlighted the problem of the vulnerability of migrants and refugees to human smugglers, who have vast networks amongst themselves and exact enormous amounts of money from the migrants and refugees. Furthermore, Sr. Stanka explained the challenges faced by the relevant institutions in trying to identify the victims. It becomes more difficult because of the transitory nature of the migrants and refugees, who are retained only briefly in any camp. 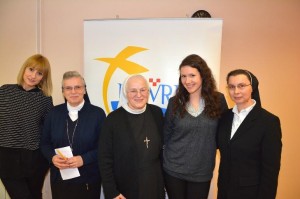 Sr. Karolina Miljak also spoke of her 40 years’ experience working with the Roma population in Croatia, who too are marginalised. She provides pastoral care and assists in their integration into Croatian society.
Sr. Miroslava Bradica, Vice President of the Croatian Conference of the Major Male and Female Religious Superiors, spoke about the activities of the female and male religious in Croatia during the Year of Consecrated Life.
Sr. Bradica concluded the conference by expressing her gratitude and support to the speakers for all their work. She thanked the journalists and all those who attended the conference.
Sr. Stanka Oršolić