Raising Awareness about Human Trafficking at the Katholikentag in Germany

RENATE Members will be present at the National Assembly of Catholics (Katholikentag) in Regensburg, Germany, 28th May – 1st June 2014. More news coming soon.
Link to the event website: Katholikentag

Play for Life, Report Trafficking: Celebrate World Cup 2014 for a Dignified Life for All


Vatican City, 20 May 2014 (VIS) – This morning a press conference was held in the Holy See Press Office to present the Talitha Kum International Network of Consecrated Life against Human Trafficking campaign for the Brazil World Cup 2014: “Play for life, against trafficking”. The speakers were Cardinal Joao Braz de Aviz, prefect of the Congregation for Institutes of Consecrated Life and Societies of Apostolic Life, Kenneth Francis Hackett, the United States’ ambassador to the Holy See, Sister Carmen Sammut, MSOLA, president of the International Union of Superior Generals, Sister Estrella Castalone, F.M.A., coordinator of Talitha Kum, and Sister Gabriella Bottani, M.C.C.J., coordinator of the network Um Grito pela Vida, Brazil.
“This campaign shows the between consecrated life and the sentiments of our Holy Father regarding this crime, that he himself has defined as a wound on the body of contemporary humanity, a wound in Christ’s flesh”, said Cardinal Braz de Aviz. Sister Carmen Sammut emphasised that unfortunately “this crime is present everywhere, for the profits from it are enormous. Prevention of this type of human trafficking entails reducing the demands for sexual services. In order for this to happen, public opinion needs to be alerted”.
Recalling the Holy Father’s remark that it is impossible to remain indifferent in the knowledge that there are human beings trafficked like goods, Sister Gabriella Bottani pointed out that, according to official statistics, this serious crime affects around 21 million people around the world and that, with a better understanding of the phenomenon and its causes, methods of encouraging it to be reported to the authorities can be found. “We must forcefully combat the code of silence and fear surrounding this serious violation of human dignity”. The message of this campaign is a concrete and positive proposal for life: “A dignified and free life for all”. It is hoped that the World Cup in Brazil may offer a positive space for the promotion of the culture of rights and life, denouncing all forms of exploitation that devalue and reduce it to the status of a commodity and raising awareness among populations regarding the possible risks and how to intervene by reporting transgressions to the authorities.
Source: Vatican Information Service_20.05.2014

More here: Vidimus Dominum
Posted on May 19th, 2014 By developer

Pray for Our Girls: Join Us in Prayer for the Girls Abducted in Northern Nigeria

An initiative of Daughters of Charity of St. Vincent de Paul: Take time to pray by name for each of the women abducted in Nigeria as well as all victims of human trafficking. 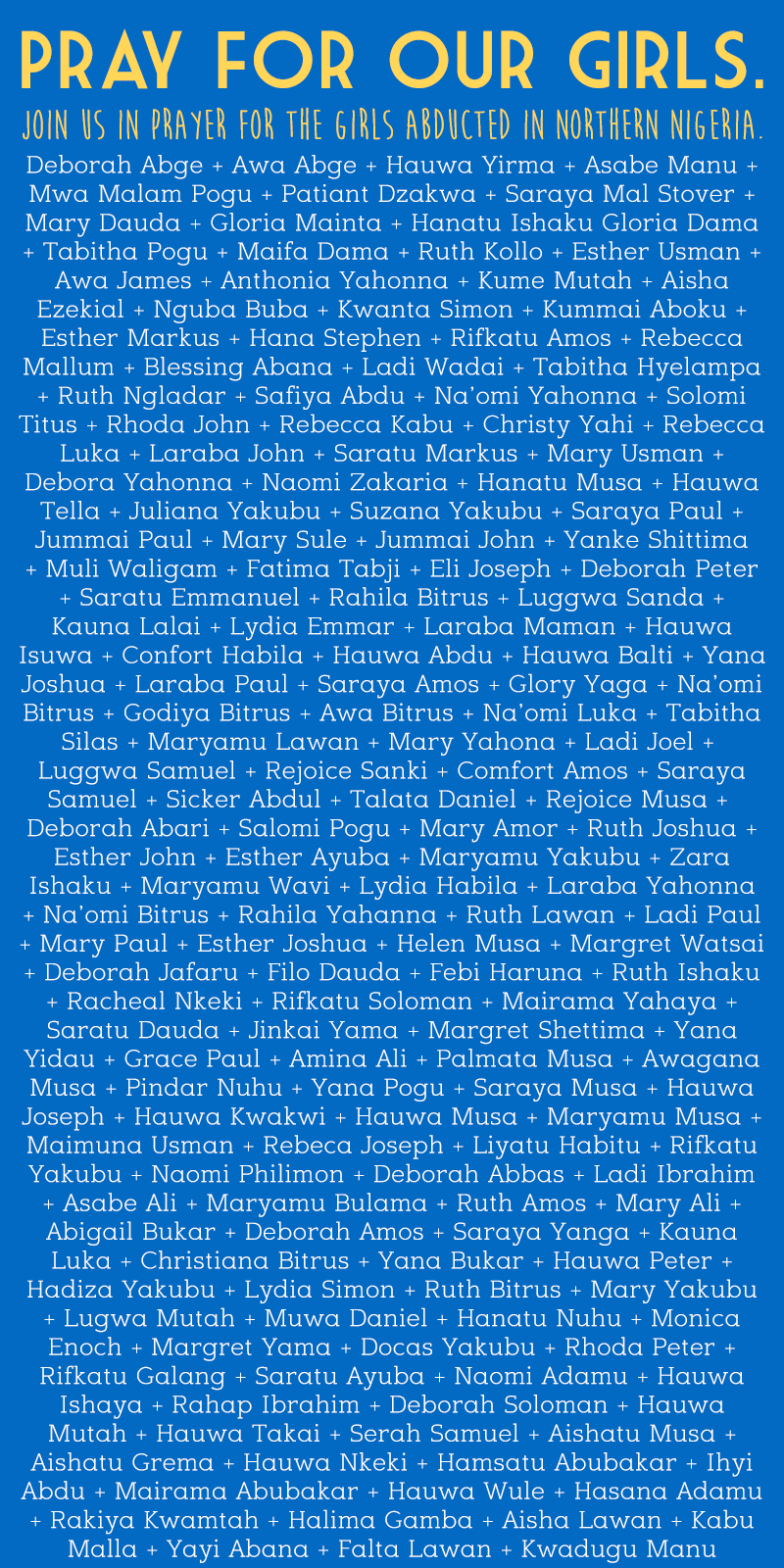 Click here to read more: Pray for Our Girls

Launch of National Plan of Action against Trafficking in Human Beings, France

On Wednesday, May 14 , a National Plan of Action against trafficking was presented to the Council of Ministers by Najat Belkacem-Vallaud on the forefront of France in the fight against trafficking. The Collective Set against trafficking in human beings welcomes the launch of the first plan, while emphasizing the need to take into account the different forms of exploitation and the means necessary for its implementation, such as explained by Geneviève Colas, coordinator of the Collective for Secours Catholique
Click here to read more: Human Trafficking – a healthy plan of French government


The EU Civil Society Platform met for the third time on May 7th and 8th. This time the platform started with a Joint Meeting of the EU Civil Society Platform with the Informal Network of National Rapporteurs or Equivalent Mechanisms (NREMs). The National Rapporteurs are responsible for monitoring the implementation of anti-trafficking policy at the national level and play a key role in data collection on trafficking in human beings at national and EU level. The first and main focus was on the implementation of Article 19 of the Directive 2011/36/EU. There was also a time to get in contact and discuss common issues. At the end of the day there was a discussion and recommendation for a follow up meeting.
The EU wants a victim-centred approach: It is important to get testimonies of the victims of human trafficking in order to sentence the perpetrators. Video testimonies can be helpful as this helps the victim to avoid a re-traumatisation. Law enforcement has been difficult. Traffickers and their companies will be pursued. The demand is expected to be throttled, we want to criminalize the clients of victims of human trafficing. It can not be, that somebody who profits knowingly from a victim of human trafficking is not at risk to be punished. Some countries have prohibited prostitution, because most sex workers are victims of trafficking. An EU Business coalition was launched to improve the awareness for zero tolerance for the use of persons living and working in slave-like conditions. For example the group was encouraged to avoid buying products, which had been made under slave conditions, by victims of human traffikcing. There has to be an education for human rights in schools. Also cinemas and theaters should be used to raise this awareness. There have to be shelters for victims.
Representatives from Portugal, Croatia , Germany and Romania gave explanations as to how the reporting mechanisms in their countries function.
One phenomena is actually that the number of sentenced perpetrators has decreased, while the number of victims has increased. This does not mean that the prosecution is less effective, but that the possibilities to spot a victim are better. We know that there are more victims, as the collected datas show. We have to improve the collection of our data.

The next day, 8th of May, after a short evaluation of the joint meeting, there were three parallel workshops:
Working Group I (identification)
Discussion Points:
1. Which elements should be included in the EU reporting on Article 11 par. 4 of Directive
2011/36/EU (identification as part of the national referral mechanisms, exchange of best
practices on effective measures taken at national level to early identify victims,  the
multidisciplinary approach, need for guidelines/common indicators?)
2. How could the civil society contribute to reporting on identification as per Article 11 par. 4 of
the Directive (cooperation between civil society and law enforcement, education, training on
identification, awareness raising?)
Answers:
The disussion in this workshop came to the conclusion that it would be better if the NGOs produced supplementary reports, and after the report from the member state has been given. The NGOs could add information, the NGOs could also work in groups for their supplementary reports and they could use the e-platform, which will be launched in June, to work together in producing these reports. Until now we have no example for such a work, as it is the first time that the civil society is included in such reporting.

Working Group II (assistance and protection)
Discussion Points:
1. Which elements should be included in EU reporting on Articles 11-12 of Directive
2011/36/EU (assistance and protection including protection in criminal investigations and
proceedings) and Article 13 -16 (Special provisions on assistance and protection to child
victims)?
2. How could the civil society contribute to reporting on these Articles?
Answers:
Human trafficking can not only be fought in identifying victims or in migration policies. The NGOs are involved in the process of identifying victims of human trafficking. This involvement needs to be implemented officially, until now it is done but not implemented as it should be. The NGOs could produce an additional report or a shadow report. Our report should be given after the official report is done, to higlight discrepancies between the member state report and the NGOs reports, for example recording the number of victims. The NGOs not only want to give data but also reflect on the process of identifiying a victim and the way of dencouncing and sentencing.

Working Group III (demand)
Discussion Points:
1. Which elements should be included in EU reporting on Article 18 Directive 2011/36/EU
(Prevention)?
2. How could the civil society contribute to reporting on Article 18 (Prevention) (education,
training, internet, awareness raising campaigns, research, criminalisation of use of victims of
trafficking)?
Answers:
All forms of trafficking have to be mentioned in the reports. There has also to be reported how much funds the member states give to support the NGOs and the fight against human trafficking. Some forms of forced marriage are not recognized as a form of trafficking, this has to be clarified. Who has the profit, and how has the demand risen? This would be the way to decrease the demand. There are some states that have also profited from the exploitation of victims of human trafficking and they are increasing the demand. There has to be reporting about the trafficking from men also. The NGOs should report after the member state reports in order to add things and to produce shadow reports or reports in which they also give their experience about what is helping to combat the demand and what is not helping in this work.

Third Meeting of the EU Civil Society Platform in Brussels

RENATE Members present at the 3rd Meeting of the EU Civil Society Platform which takes place in Brussels 7-8 May 2014. More news coming soon.

(Vatican Radio) It has been three weeks since more than 300 teenage school girls were kidnapped from a school in northeastern Nigeria by the Islamic extremist group Boko Haram, sparking widespread outrage over the government’s inability to locate the missing girls. At least 53 of the girls have managed to escape their captors since their abduction on 15 April, while 276 are believed to still be in captivity.

On Monday, a video was released by Boko Haram leader Abubakar Shekau in which he threatened to sell the girls, and to attack more schools and abduct more girls. Incidentally, the term Boko Haram means: “Western education is sinful”.
The mass abduction and the military’s failure to rescue the girls and young women has roused national outrage with protests in major cities.

“We are all ashamed,” said Archbishop of Abuja Cardinal John Olorunfemi Onaiyekan in an interview with Emer McCarthy. “The fact that, up until now we are hearing practically nothing concrete on the issue, I think almost every Nigerian is taken aback. We cannot explain what is happening”.

Campaign Against Human Trafficking at the Job Fair in Nitra, Slovakia


Job Fair: Job Expo 2014 in Nitra, Slovakia, April 29th to 30th 2014.
A Member of RENATE, Sr. Bohdana Bezáková CJ and workers from Caritas Slovakia participated in this event and tried to draw the attention of visitors to the dangerous phenomenon of human trafficking.
Simultaneously with the 4th annual job fair at the Agrokomplex, was an international job fair entitled European Job Days 2014 and also an exhibition of products and services of vocational schools –  Young Creator 2014. In the different halls, visitors could find accompanying workshops where experts advised candidates how to be successful at an interview, what to write in a resume or how to identify their own strengths and weaknesses.
About a hundred employers came to the job fair this year and there were many visitors searching for a job. Because of this the job fair was a great opportunity where a member of RENATE, Sr. Bohdana Bezáková CJ and workers from Caritas Slovakia, could inform visitors about the threats and dangers of human trafficking. They developed a campaign called “People are not for sale – Gift Box Slovakia”. The purpose of the campaign, was to spread awareness and to warn people about the possibility of being trafficked, and to present the reality of this phenomena through a static box inside which were authentic stories of the victims and their personal conversations. The more information people can obtain through this campaign, the more it is hoped that people are saved from becoming a victim of modern-day slavery.