Report from the Vatican Conference

Combating Human Trafficking: Church and Law Enforcement in Partnership
Venue: Pontifical Academy of Sciences and Social Sciences, April 9th -10th 2014
Leaders in the church and law enforcement gathered from all over the world to create a joined-up and cross-border commitment to combat human trafficking. A declaration of intent was signed by both parties at the end of this conference. 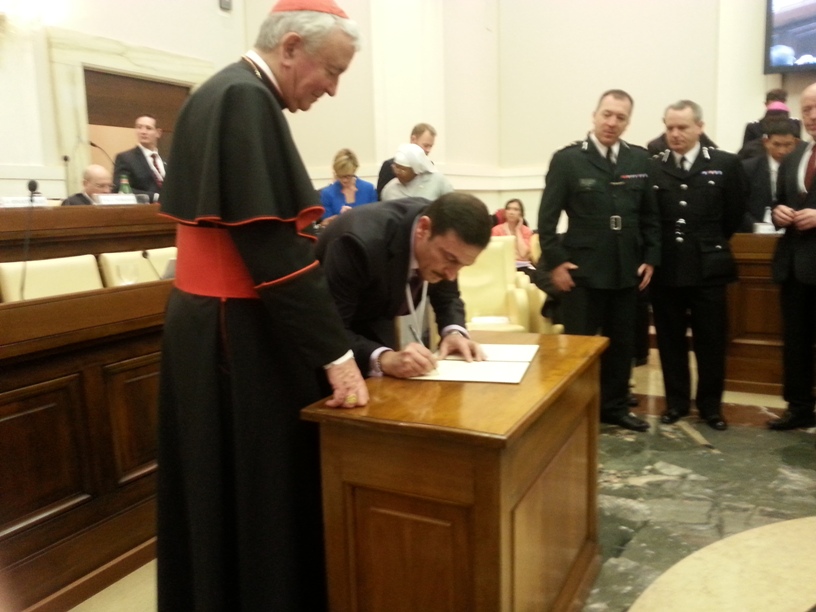 To authentic the proceedings and to keep in touch with the real, three victims of trafficking gave a stirring and mind-changing input which would have urged all participants to stay true to this commitment. Fortunately, Teresa May, the Home Secretary in the UK, was able to be present and also gave invaluable input. She offered hope to those gathered stating that the work against trafficking in human persons is a priority in the government. Finally, five religious sisters were present, all of whom worked at the coal face and represented UISG, RENATE, The International Congregation of the Adoratrix, and the Congregation of the Sacred Heart of Jesus in Nigeria.
The proceedings began with prayer followed by a brief statement from Cardinal Nichols who opened the conference and welcomed all present. He said:  “Our perspective in everything we do and say has to be informed by the voice of the victim”.  A short film followed this statement showing the disturbing experiences of four victims of trafficking. They were all caught up in the web of deceit which trapped them into the hope of a better life and greater opportunity but which had ended in misery, torture and a long road to recovery.
Dr Domenico Giani, the Inspector General of the Vatican Gendarmerie, made four important points: the need to extend the jurisdiction of certain offices in order to embrace, in its totality, the work to combat human trafficking; the power of finance in increasing the ability to commit the criminals; the need to confiscate the assets and re-deploy the money for the work; and finally the need for a strong finance base to combat terrorism.
Bishop Patrick Lynch, the chair of the Office for Migration Policy is a member of the Bishop’s conference Department of International Affairs in the UK. He spoke with passion about the need for a greater awareness of this issue in order to become convinced of the evil being perpetrated.  He saw the need for deeper compassion and to be collaborative in all the work.  For this to happen he spoke of the need to create good will amongst all of the protagonists.  He spoke of St Josephine Bakhita as our role model, a slave herself who was drawn by compassion to free herself from the hands of the slave owners. In the light of this he spoke of the work of women religious all over the world, engaged in the field, at the coal face with victims and in raising awareness of this crime.


The final word was given to Pope Francis who came at the end of this day’s proceedings to speak to the gathered forum.
“I greet each of you participating in this Conference, the second such gathering held here in the Vatican to promote united efforts against human trafficking.  I thank Cardinal Nichols and the Bishop’s conference of England and Wales for organizing this meeting, and the Pontifical Academy for Social Sciences for hosting it.
Human trafficking is an open wound on the body of contemporary society, a scourge upon the Body of Christ. It is a crime against humanity.  The very fact of our being here to combine our efforts means that we want our strategies and areas of expertise to be accompanied and reinforced by the mercy of the Gospel, by closeness to the men and women who are victims of this crime. Our meeting today includes law enforcement authorities who are primarily responsible for combating this tragic reality by a vigorous application of the law.  It also includes humanitarian and social workers, whose task is to provide the victims with welcome, human warmth and the possibility of building a new life.  These are two different approaches, but they can and must go together. To dialogue and exchange views on the basis of these two complementary approaches is quite important.  Conferences such as this are extremely helpful, and, I would say, much needed.
I believe the one important sign of this is the fact that, one year after your first meeting, you have regrouped from throughout the world in order to advance your common efforts. I thank you for your readiness to work together.  I pray that our Lord will assist you and that Our Lady will watch over you”.  (Pope Francis)
Finally it is good to remind ourselves of the estimated facts:
According to the first edition of the Global Slavery Index, which provides an estimate country-by-country, of the number of people living in modern slavery today, the greatest number rank in the following ten countries: India, China, Pakistan, Nigeria, Ethiopia, Russia, Thailand, Democratic Republic of Congo, Myanmar and Bangladesh. Taken together, these ten countries account for 76% of the total estimate of 29.8 million enslaved people. Over time, the Global Slavery Index report will fill gaps in information about the size and nature of the problem, risk factors and the effectiveness of responses. The intention is to inform and empower civil society groups working on this issue, and to assist governments to strengthen their efforts to eliminate all forms of modern slavery.
We finish with the words of Pope Francis: Human trafficking is an open wound of contemporary society. A scourge upon the body of Christ.  It is a crime against humanity.

The Tablet: Let’s not look the other way by Sr. Imelda Poole IBVM, President of RENATE

Jeden Svet in Slovakia: Topic of HT at the Festival of Documentary Films


The seventh edition of The Jeden Svet (One World) Film Festival took place in Prievidza, Slovakia from 17th till 22nd March. This year its major theme was human rights and one of the specific topics was human trafficking. Participants could watch twenty seven documentaries which included two films about modern day slavery. These were: “Na bulvári zlomených snov” (On the boulevard of the broken dreams) and “0800 800 818” (Slovakian production). On Wednesday, 19th March Sr. Bohdana Bezáková, Manager of Stop Human Trafficking Project and Member of RENATE led discussion about this phenomenon. She unveiled campaign “Ľudia nie sú na predaj – GIFT box Slovakia” (People are not for sale – GIFT box Slovakia) in the House of Culture of Prievidza. This campaign was organised in collaboration with Stop The Traffick, Global OSN Initiative and Caritas. The aim is to draw attention of Slovakian citizens on the issue and inform about potential risks of travelling and accepting dream job offers from abroad.